The Wolf Man of the Sierra Morena 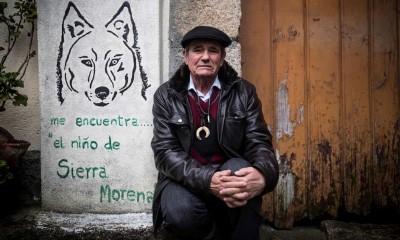 MARCOS RODRIGUEZ PANTOJA was born 7 June 1946, in a squat, whitewashed house in the village of ANORA, CORDOBA. His parents Melchor and Araceli had two other boys. The rural economy had collapsed after the Civil War and life was harsh. The family were poor and they left for Madrid in search of work. Melchor found work in a brick factory but soon after the family arrived his wife died.

Melchor remarried and sent one of his sons to live with his family in Barcelona and left another with relatives in Madrid.  Melchor kept Marcos with him, and together the new family returned to the south, to CARDENA, CORDOBA where Melchor took a job making charcoal. Marcos, at the age of four, took care of the family’s pigs. He would be sent to steal acorns from the landowner’s estate to feed them and was regularly beaten by his step mother.

When he was about six a man arrived on a horse and spoke briefly with his father and then took him home with him. The man told him his father had sold him and that he would now work for him tending his herd of 300 goats. The next morning the man took him on horseback to a small cave deep in the sparsely populated SIERRA MORENA MOUNTAINS, a mountain range full of WOLVES and wild boars. There he was handed over to the care of an elderly shepherd. He slept outside, and at first was frightened by the animal noises. The old shepherd gave him goat’s milk to drink, and taught him how to make traps for pheasants and hares and light fires.

One day not long after, the old shepherd went off to shoot a rabbit and never returned. Nobody came to replace him and when the landlord appeared from time to time to check on the goats, Marcos hid from him. After suffering years of beatings from his stepmother, he preferred the solitude of the mountains to the thought of home.

In the following weeks, the young boy tried to suck milk from the goats and catch pheasants and fish, but had little success. So, instead he started following the lead of the animals. He watched how wild boars dug for tubers and how the birds picked berries from bushes. He improvised traps for rabbits and noticed that when he gutted them in the river, their blood attracted the fish. What little the goatherder had taught him before he died was enough for him not to go hungry.

Marcos says he established a special bond with some animals. Many will find it hard to believe this story, about his relationship with a family of wolves: "One day I went into a cave and started to play with wolf cubs that lived there and I fell asleep. Later, the mother brought food for them and I woke up. "She saw me and looked fiercely at me. The wolf started to rip the meat apart. A cub got close to me and I tried to steal his food, because I was hungry as well. The mother pawed at me. I backed off.

Marcos also says he had a snake as a companion. "She lived with me in a cave that was part of an abandoned mine. I made a nest for her and gave her milk from the goats. She followed me everywhere and protected me," he says.

Marcos says these relationships kept loneliness at bay and he was only lonely when he could not hear animals - and in such cases he would imitate their call. He can still reproduce the sound of the deer, the fox, the aguililla (booted eagle) and other animals. "Once they answered, I would be able to sleep because I knew they hadn't abandoned me," he says. Bit by bit, sounds and growls replaced words.

In early 1965 a park ranger reported to the police that he had seen a man with long matted hair, dressed in deerskin, roaming the SIERRRA MORENA. Three mounted officers were sent to search for him where they found him deep in the Sierra under a tree eating fruit. He had not spoken for 12 years and was unable to communicate with them. He tried to flee, but the officers caught him, tied his hands and brought him to the nearest village, FUENCALIENTE, at the foot of the mountains.

He was then taken to the local jail in Cardena, about 20 km away, while the officers searched for his father. But, when they eventually tracked Melchor down, they did not charge him for selling his own son into slavery – they merely asked if he wanted the boy back. Instead of welcoming him back with open arms his father berated him for losing his jacket he had been given as a child. When the police saw that Melchor had no interest in him, they simply left him in the main square of Cardeña.

Two shepherds known locally as the “widowers” took him in, and put him to work tending their sheep. Just a few days after his capture, Marcos was back in the mountains, looking after animals again. In the spring of 1966, the shepherds he was working for moved their flock near the village of LOPERA, where there was good grazing. The son of the local doctor, a curate named JUAN LUIS GALVEZ, encountered Marcos, scared and still unable to speak. At the end of the summer of 1966, Galvez sent him to the Hospital de Convalecientes, a convent infirmary in Madrid. There, doctors cut the calluses from his feet and placed a board on his back so that he would stand straight, and the nuns carried on his language lessons.

While Marcos stayed at the convent, he worked on construction sites in and around Madrid. The nuns had hoped this would prepare him for society, but it didn’t help much.  At the beginning of 1967, Rodríguez was sent to do military service in Córdoba. He didn’t last long. He fired his gun during a training drill and almost killed a member of his platoon. He was discharged, and returned to the hospital in Madrid.

On his return, he met a fellow patient who convinced him to go to the island of Mallorca – which was then turning into a tourist destination for people from all over Europe. There would be lots of work, the man told Marcos, and he could finally have some independence. As soon as they arrived on the island, his travelling companion stole his suitcase and the little money the nuns had given him, and left him stranded in a hostel. The owners, who thought Marcos was pulling a scam, called the police. The nuns had called ahead to warn the local constabulary of his arrival so instead of being arrested he was put to work to pay off his debts.

It was in Mallorca, in 1975, that Marcos was introduced to GABRIEL JANER MANILA, the anthropologist who would go on to produce the most significant study of his life in the wild and its effect on his subsequent development. Janer admitted that he struggled to believe this fragile-looking, childish man, who was telling the most incredible tales. But the more he heard of his story, the more credible it seemed. The pair met almost every day for six months and Janer noticed his story never varied, the facts never changed, no matter how many times he was asked to tell it or how many times he was asked to clarify something. After a series of intelligence tests Janer determined that Marcos had no learning disabilities. Instead, he concluded, his emotional and social development had remained frozen at the moment in his childhood when he was abandoned.

Marcos left Mallorca in the 80s and moved to FUENGIROLA, MALAGA where he worked in a series of jobs. A retired policeman from Galicia, MANUEL BARANDELA was visiting his son when he spotted Marcos living in the basement of an abandoned building. They talked over lunch, and Marcos gave him Janer’s book to read. After struggling through his story with the help of a Catalan dictionary, Barandela decided to take him back to RANTE, GALICIA, where he could offer him a home and give him work on his homestead.

In Rante, Rodríguez found quiet and solitude for the first time since his capture. Barandela tried to teach him to read, so that he could at least use the phone and recognise the names of medicines, but it proved almost impossible. Barandela found it hard to talk to him, and began to worry it had been a mistake to take him in. “In the end, I came to see Marcos as a child,” he recalled in a Spanish interview in 2010, shortly before he died. “Understanding him this way made everything easier.”

The release of the film ENTRELOBOS (AMONG WOLVES) in 2010, and the sudden flood of interest in the circumstances of Marcos’s abandonment, brought back to life a forgotten Spain, cut off from the world, struggling to survive on scarce resources under a repressive dictatorship. Marcos told the director GERADO OLIVARES he had given him back his dignity.

He now lives in RANTE, a sleepy hamlet of 60 or so families in Galicia, in north-west Spain. He is retired, and spends his time walking in the countryside, at the bar, or hunting wild boar with a friend. The rest of the time, he stays home, watching daytime TV for hours.