MADRID may be the life giving sustaining heart of SPAIN but SEVILLA - SEVILLA she is the SOUL.

The province of SEVILLE has many historical towns with beautiful buildings, gorgeous countryside, and large haciendas where the famous fighting bulls are bred.

Seville is the swarthy capital of Andalucia and the essence of Spain. Legend has it that the city was built by Hercules and one of the first things you notice is that many of the buildings are golden yellow or pinkish red. The yellow, according to history, symbolises gold, money and power, and the pinkish red is the city's emblematic colour.

SEVILLE has a distilled mixture of those quintessential ingredients, fiery dance, bull fighting, siestas and fiestas, traditional tapas and the fragrance of orange blossom on every street. Seville straddles the meandering Guadalquivir River with its fine bridges, has a skyline of Roman, Moorish, Gothic, Renaissance and Baroque architecture, and a labyrinth of shady streets, museums and galleries.

The best way to see SEVILLE is on foot starting in the winding alleyways of the medieval Jewish quarter Santa Cruz, where the doors are so extraordinarily tall (so that the Sevillanos could enter on horseback), white washed houses are built indecently close together to keep the cool.

One of the things that everybody wants to do when they come to Seville is to spend some time wandering through the Barrio Santa Cruz, the picture postcard neighbourhood of little squares and narrow streets behind the Cathedral, which in mediaeval times was the city’s Jewish quarter. It is certainly the prettiest part of the old city, full of interesting nooks and crannies with stories to be told, and charming little bars where you can sit and watch the world go by while enjoying your tapas and a glass of sherry.

Explore the cities many barrios (districts) each with individual charm. MACARENA is so unique that it even has its own dialect and was once the poorest part of the city its 17th century barrios, beggars and urchins were models for Murillo's paintings. Macrena is now the seat of officialdom of the Andalucian parliament and home to many beautiful churches such as Santa Catalina. On the other side of the river, TRIANA, originally the heart of the gypsy community and the best place to listen to flamenco provides a respite from the crowds.

Seville is renowned world-wide for its history, culture and monuments. The GIRALDA is the oldest Arab minaret and the symbol of this fascinating city.  The vast Gothic cathedral houses the tomb of Christopher Columbus. The district of El Arenal has an undeniable bullfighting flavor and here stands the Real Maestranza, Seville's bullring, where bullfighting is the passion of the local people. A short distance away is the Torre del Oro, (Golden Tower), the ancient Arab fortress which received the gold and silver from America.

The ALCAZAR is a series of palaces built in the 10th century and adapted in a succession of kings. The finest is Pedro del Leon, Pedro known as "Just" or "Cruel", where, depending on his mood, gave his judgement. One of the most beguiling mansions is the CASA DE PILATOS, thought to be an imitation of Pontius Pilate’s house. 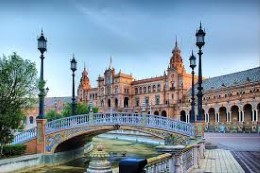 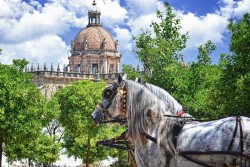 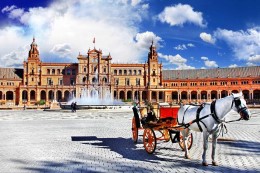 The city thrives on party and parade, and is famed for its festivals. Semana Santa sees the Sevillanos temporarily leave frivolity behind as they embrace an air of respectful solemnity. Wearing austere robes they carry staggeringly intricate Catholic effigies through the streets in a powerful display of religious fervour witnessed by the entire city.  Two weeks after Easter is the April Fair which is a hedonistic class of colourful flamenco costumes, horse displays, bullfights, music and of course plenty of chilled sherry.

9 kms from Seville are the ruins of the Roman city of ITALICA founded by Publius Cornelius Scipio in 206 BC. It was the birthplace of the Emperors Trajan and Hadrian and a visit should include the amphitheatre, the baths, the mueseum and the ruins of the houses with splendid mosaics.  The amphitheatre is the largest structure at the archaeological site but it is only a small part of the original city. Beyond the amphitheatre part of the excavated town has been left exposed, revealing wide streets with large, spacious houses decorated with some very fine mosaics.  If you look down on the street plan from the top of the hill you can appreciate the size of this city which was once the third largest in the Roman Empire. The remains continue under the modern village where a theatre and a bath suite can also be visited. The layout we see today was largely due to the Emperor Hadrian and probably constructed to honour his adoptive father the Emperor Trajan. Both were born in Italica.

Take time to visit some of the lovely towns such as ESTEPA perched on the slopes of a hill,called Istabba in Arabic Estepa acquired some relevance owing to its strategic location on a crossroad. The view from the castle on top of the hill over the country is absolutely splendid. Above the ancient walls is a complex of convents and churches. Knock on the door of the 16th century SANTA CLARA CONVENT and buy some delicious sweets made by the nuns. From the castle on top of the hill there are splendid views of the countryside.

OSUNA is a small town with abundant evidence of its past grandeur where old palaces dot the streets dating from the times when the Dukes of Osuna ruled. A beautiful Renaissance church has been carefully restored, and beneath it is the Pantheon still used by the Osuna family. Take a walk down Calle San Pedro and admire the impressive house facades including the Counts of La Gomera.

ALCALA DE GUADIARA is where Washington Irving noticed packs of mules and donkeys loaded with large baskets of loaves and rolls, referring to the well-known tradition in the town of baking, which is still applicable nowadays.

CARMONA with its Roman and Arab past has two entrance gates to the old walled city where there are many monuments and a well preserved old quarter. The Church of Santa Maria la Mayor is a temple erected over a former mosque and surrounding it are stately buildings. The baroque town of ECIJA has eleven churches studded by tall steeples and is the hottest town in Andalusia during the summer, known as 'The Frying Pan of Spain'. The town is beautiful with some fantastic monuments and palaces and time should be taken to stroll the quaint streets and explore this lovely city. 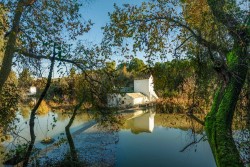 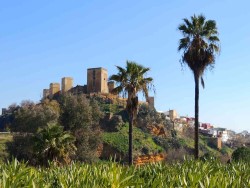 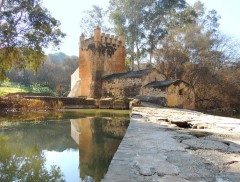 On the way to Carmona pass through the enchanting village of Gandul where there is an Almohad tower beside a Baroque palace set among Roman ruins and medieval remains. Followed by the romantic traveller WASHINGTON IRVING in 1829, the legendary feature is that in the 19th century it was famous for contraband and highwaymen such as the well-known Siete Ninos de Ecija, (seven children from Ecija), and Jose Maria, EL TEMPRANILLO (The Early-bird). Along the way are numerous small towns and villages with countless Mudejar and Barroque buildings and churches. There is an old saying that the reason "why the horses in the countryside of Seville are so fleet of foot is because the mares are made pregnant by the wind".

Meander into the SEVILLE countryside to visit some of the towns & villages. The pretty town of CAZALLA DE LA SIERRA is the most important town in the Sierra Norte and boasts one of the best churches in the Sierra Morena, grand mansions, and beautiful churches and out of town, a 15th-century monastery that has been converted into a hotel. CONSTANTINA is the largest town in the Sierra Norte Natural Park and was originally a Celtic settlement and an important Roman town. It has lots of medieval character particularly in the maze of cobbled, steep streets in Barrio La Morería where you will also find pretty whitewashed houses and elegant 18th century mansions. Climb up to the ruined Moorish castle for some spectacular views.

We have two lovely villas for sale ijust outside of Cazalla de la Sierra just waiting for their noew owner.

LANTEJUELA is part of the highly protected area known as the Reserva Natural Complejo Endorreico de Lantejuela. Within this area you can find lakes surrounded by crop fields and you may also see birds such as storks, flamingos and geese.

Perched on top of one of the hills dotting the arable fields of LA CAMPINA is the town of Las Cabezas de San Juan. It overlooks the Guadalquivir wetlands and the Donana Natural Park. Just outside Las Cabezas de San Juan is the luxurious Hacienda de San Rafael, a former olive farm with a beautiful patio filled with bright bougainvillea. Enjoy the panoramic views over the surrounding vineyards from this pretty walled town. The focal point of the town is the Santa Maria de Oliva church which was built as a 12th century mosque and converted to a church by Alfonso X.

Flamenco is part of the culture of Seville and there are many ways to enjoy this. The story of CARMEN, the gypsy who worked in the city’s sugar factory is known worldwide is set in Seville. When Carmen transferred her affections to a bullfighter she is stabbed to death by the jealous Don Jose outside the bullring where there is now a statue dedicated to her.

The TAPA originated in Seville when this refreshment was a piece of bread was put over a glass of wine to keep the flies off. This refreshment was handed to the horsemen who rode to the inn before they dismounted. Soon cheese or meat was balanced on the bread to make an appetizing snack and has since become Spain’s most enduring ritual. Have a drink and tapa in the Hostelleria de Laurel and they will take delight in informing you that Don Juan drank here!!

'He who has not see it will be much to pity'. Lord Byron