ANDALUCIA is like a woman, passionate, vibrant, alluring and warm, and sometimes with a dark, brooding side

ANDALUCIA a land of startling contrasts, sheer beauty, majestic mountains, olive groves, National Parks and warm, friendly people. ANDALUCIA is a world that belongs to the past but this past had a reputation and an impact on the people who experienced it and left behind a culture, music and ideas that still exist today

ANDALUCIA is rich in HISTORY... and culture and has seen the passing of Phoenicians, Romans, Moors, Muslims and the French. The Arabs transformed the landscape of southern Spain and planted bitter oranges and lemons, grew almonds and cultivated the olive. 3/4 of Spain's' grey- green olive trees grow here and supply 80% of her olive oil. In the north of Jaen a single grove has 2 million trees. You can still see the everyday life of Arab culture in the small villages, towns and cities with houses built in the old style with Africa in the grilles and doors studded with heavy nails called media naranjas (half oranges).

HISTORY says that the Greek God Hercules separated Europe from Africa at the Straits of Gibraltar creating the Mediterranean Sea. Hercules son of Zeus became a special symbol and his image can be seen today on the coat of arms of the green and white Andalucian flag along with two legendary columns.

Life in ANDALUCIA is laid back with siestas in the hot summer lasting half a day, and it is quite usual to see a local in the countryside asleep under a tree, all troubles postponed until manana. The Andalucians live life to the full, be it in a crowded tapa bar, part of the roaring crowd at the bullfight, joining in with the swirl of flamenco dancers or just taking a paseo (promenade).

Andalucia is made up of 8 Provinces and is the essence of all that is Spain. The coast stretches from Cadiz and Huelva on the windy Atlantic to dusty Almeria deep in the Mediterranean. It is the size of England with the terrain as varied as Scotland and the population of Ireland. Seville, the capital of Andalucia, Cordoba, and Jaen are the inland provinces with Malaga & Granada bordering the sparkling blue Mediterranean of the Costa del Sol and Costa Tropical.

Follow the mountain road out of Malaga and head into the Montes de Malaga Natural Park, where you can picnic, walk or simply admire the beautiful scenery. The mountains inland from Malaga, the Sierra de Camorolos, were once a refuge for bandits during the 18th-19th century, and in the mountains could be found the MIGUELETES, a rural police force (the name originated from the shotguns they carried), whose aim in life was to search out and capture the legendary BANDOLEROS of the Sierras and attempt to escort them to their headquarters in Granada.

Journey through our stunningly beautiful countryside and have the experience of a lifetime. Visit the lovely city of Jaen or Jerez the sherry and horse capital of Andalucía, just two of the many historic and interesting Moorish Cities. Or Seville where the heady fragrance of orange blossom filles the air in the summer.

LAKES – Andalucia is full of them, from small lagoons full of wildfowl and birds, to the larger lakes for swimming, picnic and water sports. Nowhere is there a region as diverse with so much to do and see as in Andalucia, where there are some of the stunningly lovely National Parks and Nature Reserves which abound with rugged landscape, oak forests and an abundance of wildlife.

There is a romantic, fairy tale element to the ‘City of Dreams" that even cast write Ernest Heminway and actor Orson Welles under their spell.  Hemingway wrote in his novel “DEATH IN THE AFTERNOON”, "It is where you go to Spain on a honeymoon or if you ever bolt with anyone". The entire town and as far as you can see in any direction is romantic background. Sipping coffee in the main Plaza del Socorro, it’s not difficult to imagine HEMINGWAY scribbling in the shadows of a backstreet café. His legacy remains in a street running round the back of the Parador Hotel, the Paseo de Hemingway. Hemingway celebrated his final birthday in 1960 in Ronda.

The shepherds of the SIERRA NEVADA say when there are storms in the Mediterranean the waters of the LAGOON turn choppy and make sounds like the beating of waves against cliffs. They say their depth is unfathomable and that they run down to the sea.  - The lagoons are "Eyes of the sea" according to the legend quoted by GERALD BRENNAN. 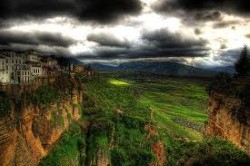 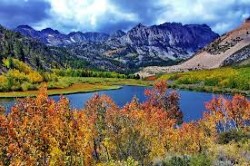 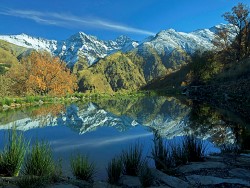 ANDALUCIA -  warm, friendly people who will invite you into their homes and hearts. Life in the Pueblos Blancos is little different now as in the past, with the villages being deserted by day in the high summer and alive at night. Family, religion, food and wine are the pillars of society, communities are neighborly and social, and in the summer evenings chairs come outside for people to sit and have a gossip and the governing paseo (promenade) is the social event of the day.

So what are you waiting for – come and visit us, enjoy life to the full with the fragrance of blossom on the summer air, culture before your eyes, while away a few pleasant hours with the locals and ENJOY LIFE. We have a wonderful selection of properties for sale in Andalucia.