El Tempranillo - The Most Famous Bandit 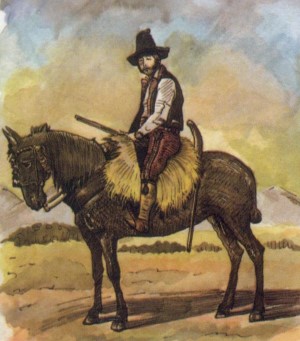 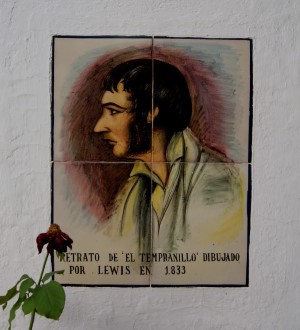 The most famous bandit was JOSE MARIA HINOJOSA CORBACHO - EL TEMPRANILLO (the Early One) born in 1805 in JAUJA, Cordoba. He is believed to have killed his first man at the age of 15, no-one is sure of  the cause, but he evaded arrest and joined a gang of young bandoleros, later establishing his own gang near the Despenaperros pass, the mountain route into Andalucia from the north.

EL TEMPRANILLO was a short man with only one hand (he lost the other in a pistol accident), and according to records was handsome, dressed in fine shirts and velvet jacket with silver buttons and leather bindings well, and rode a cream-coloured horse. At the age of 22 he claimed “the King may reign in Spain, but in the Sierra l do” and had the nickname “KING OF THE SIERRA MORENA". He reputedly demanded an ounce of gold for each vehicle which crossed his domain.

EL TEMPRANILLO quickly became famous for his charm. Legend has it that when he stopped a coach — he lorded over all the thoroughfares anyway — he held out his hand to the lady passengers to help them alight and let them rest in the shade till the “the business” was over. There is also this story of him complimenting a woman traveller ‘Ah Senora! A hand as beautiful as yours does not need adornments’, while relieving her of her jewellery, before kissing her hand and biding her safe journey onward. But family jewellery he would never touch; he even left some money for the travellers so that they could at least reach the next town. He also acquired a Robin Hood-like reputation, redistributing his ill-gotten wealth among the poor.

At one point, frustrated authorities, in the form of Don Vincente Quesada, Captain General of Andalucía's armed forces, offered a reward of six thousand reales to the soldier, royal volunteer or private individual who apprehended El Tempranillo dead or alive.

One tale tells of a raid on the inn at GAUCIN, where, while over sixty royalist troops were eating and drinking, El Tempranillo, and his men stole all of their weapons. When a certain Lieutenant Céspedes, of the military unit known as the Migueletes, shed his uniform to join them on their raids, he was met with intense distrust on the part of the other highwaymen. However, before long he had become a feared member of the group known simply as “Venom”.

Another tale tells of the time the Migueletes had concocted a plan to ambush the highwaymen and kill El Tempranillo. On the orders of the Lieutenant of Seville, José Manuel de Arjona, the Migueletes took advantage of the fact that María Jerónima, El Tempranillos' wife, was heavily pregnant to send a message purporting to be from her to José María, informing him that she was about to give birth. José María, not wishing to endanger the lives of his companions, ordered them not to follow him.

So, El Tempranillo made for the farmhouse where his wife was being attended to, fully aware that the Migueletes were probably waiting there to ambush him. As expected, his arrival sparked off a violent affray in which a number of men were killed and injured. His unfortunate wife, María Jerónima, died during labour as a result of the lack of facilities available and the terrible events that unfolded around the village delivery room. Fearing that all was lost, José María placed the lifeless body of his wife across the hindquarters of his horse, took his new-born son and tucked him as best he could inside the sash around his waist, ordering the women who were in the house to open the door. El Tempranillo shot through the door like an arrow on the back of his trusty steed, firing shots in all directions with both hands. The Migueletes were so startled and bewildered by his exit that José María managed to escape unscathed.

El Tempranillo's daring broad daylight hold-ups, and his increasing popularity among the general public, eventually forced King Fernando VII to offer him a pardon in return for his working for the state. The pardon was formally granted in Estepa in August 1832, although no written record of the pardon survives. JOSE MARIA was made commander in chief of the Escuadrón Franco de Protección y Seguridad Pública de Andalucía (the Free Squadron for the Protection and Public Security of Andalucía), at the head of sixty mounted guards who wore a uniform similar to that of Spain's army. This was eleven years before the establishment of Spain's Guardia Civil in 1844.

The bandolero turned policeman was seriously injured in a shoot-out while pursuing another José Maria, the bandolero EL BARBARELLO, from Estepa, during an attempted arrest on the road between ALAMEDA and MOLLINA in 1833. He was taken to the Parador de San Antonio in Calle Granada in Alameda, but died the next day, 23 September 1833. He was given the last rites by the town's parish priest, Navarette, and dictated his last will and testament before one Jerónimo Orellana, the village's notary. Despite his years of banditry, El Tempranillo left little to his orphaned son, also baptised José Maria. The will contained little more than two small houses, two horses and a few reales borrowed from friends.

JOSE MARIA HINOJOSA CORBACHO was buried in a carved tomb in the patio of the parish church of ALAMEDA surrounded by arches, flowers and palm trees and crowned by a stone cross and Andalucian tiles showing the death certificate of this legendary character. The inscription reads El Rey de Sierra Morena’(The King of the Sierra Morena). 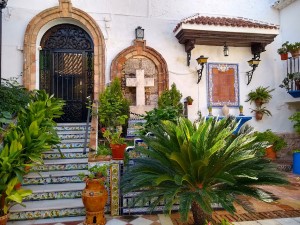 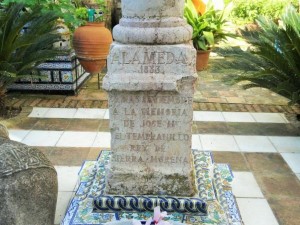