April 18th is WORLD HERITAGE  DAY, also called World International Monuments and Sites Day and is a day to celebrate the diversity of cultural heritage and the importance of trying to protect and conserve it.

ANDALUCIA has seven World Heritage sites inscribed on the list - five cultural, one natural, and one both cultural and natural. These are, namely: Alhambra, Generalife and Albayzín (Granada); Cathedral, Alcázar and Archivo de Indias (Seville); the Historic City Centre of Cordoba (including the Mezquita); the Renaissance Monumental Ensembles of Úbeda and Baeza; 68 items of cave art in Almeria, Granada and Jaen provinces, which is included in Rock Art of the Mediterranean Basin on the Iberian Peninsula; and Madinat al-Zahra.

The natural World Heritage Site is DOÑANA NATIONAL PARK in Huelva province –wetlands and birders paradise. The park consists of the delta region where the Guadalquivir River reaches the Atlantic Ocean. It is home to a diverse variety of biotopes, such as lagoons, marshlands, dunes, and maquis. The park is one of the largest heronries in the Mediterranean region and holds more than 500,000 water fowl during the winter period. 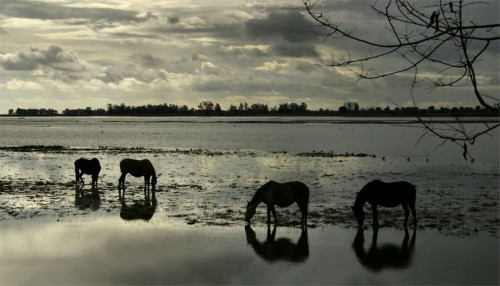 Located in the heart of Andalusia the ANTEQUERA DOLMENS site comprises three megalithic mouments: the Menga and Viera dolmens and the Tholos of El Romeral, and two natural monuments: La Peña de los Enamorados and El Torcal mountainous formations, which are landmarks within the property. Built during the Neolithic and Bronze Age out of large stone blocks, these monuments form chambers with lintel led roofs or false cupolas. These three tombs, buried beneath their original earth tumuli, are one of the most remarkable architectural works of European prehistory and one of the most important examples of European Megalithism.

Close to Andalucia, on the Rock of Gibraltar, is the GORHAM’S CAVE COMPLEX, added at the same time. Rock Art of the Mediterranean Basin on the Iberian Peninsula is the largest group of rock-art sites anywhere in Europe, and provides an exceptional picture of human life in a critical phase of human development, which is vividly and graphically depicted in paintings that are unique in style and subject matter.

Prehistoric Levantine rock art sites are found in the coastal and inland mountain ranges of the Mediterranean Basin of the Iberian Peninsula over 1,000 kilometres of coast, from Catalonia to Andalusia. The property includes 758 sites distributed across six Autonomous Communities, in Andalusia 68 separate cave paintings are to be found in Velez-Blanco and Maria in Almeria; Almaciles and Huescar in Granada; Quesada, Pontones and Santiago de la Espada in Jaen.

The cave art constitutes an exceptional historical document due to its broad range and provides rare artistic and documentary evidence of the socio-economic realities of prehistory. It is exclusive to the Mediterranean basin of the Iberian Peninsula due to the complexity of the cultural processes in this region in later prehistory and factors related to conservation processes, such as the nature of the rock and specific environmental conditions as well as the range of subjects 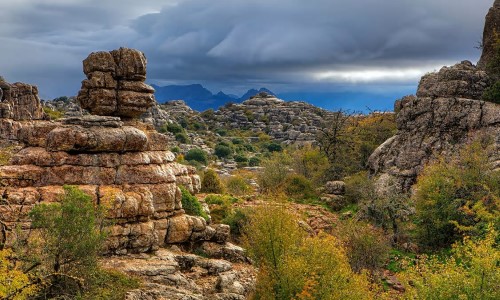 ALHAMBRA AND GENERALIFE GARDENS were added to the list in 1984. What UNESCO says: "Rising above the modern lower town, the Alhambra and the Albaycín, situated on two adjacent hills, form the medieval part of Granada. To the east of the Alhambra fortress and residence are the magnificent gardens of the Generalife, the former rural residence of the emirs who ruled this part of Spain in the 13th and 14th centuries. The residential district of the Albaycín is a rich repository of Moorish vernacular architecture, into which the traditional Andalusian architecture blends harmoniously."

The Albayzin, or Albaicin was added to list in 1994. Atmospheric hillside Moorish neighbourhood, with many carmens - town houses - converted into beautiful hotels and restaurants; great views of the Alhambra. El Albaicín is the old Moorish quarter of the city. It's located on a hill facing the Alhambra and there are dramatic views of this area from the palace's famous rose gardens.

SEVILLE What UNESCO says: "Together these three buildings form a remarkable monumental complex in the heart of Seville. The cathedral and the Alcázar - dating from the Reconquest of 1248 to the 16th century and imbued with Moorish influences - are an exceptional testimony to the civilization of the Almohads as well as that of Christian Andalusia. The Giralda minaret is the masterpiece of Almohad architecture. It stands next to the cathedral with its five naves; the largest Gothic building in Europe, it houses the tomb of Christopher Columbus. The ancient Lonja, which became the Archivo de Indias, contains valuable documents from the archives of the colonies in the Americas."

CORDOBA What UNESCO says: "Cordoba's period of greatest glory began in the 8th century after the Moorish conquest, when some 300 mosques and innumerable palaces and public buildings were built to rival the splendours of Constantinople, Damascus and Baghdad. In the 13th century, under Ferdinand III, the Saint, Cordoba's Great Mosque was turned into a cathedral and new defensive structures, particularly the Alcázar de los Reyes Cristianos and the Torre Fortaleza de la Calahorra, were erected."

The Mezquita, with its signature striped arches, and the Juderia has windy streets; look out for the beautiful patios, for which Cordoba is well known. The Alcazar has beautiful Moorish-style gardens, with large pools and fountains and stunning flowerbeds.

The Renaissance Monumental Ensembles of UBEDA and BAEZA were added to the list in 2002. What UNESCO says: "The urban morphology of the two small cities of Úbeda and Baeza in southern Spain dates back to the Moorish ninth century and to the Reconquista in the 13th century. An important development took place in the 16th century, when the cities were subject to renovation along the lines of the emerging Renaissance. This planning intervention was part of the introduction into Spain of new humanistic ideas from Italy, which went on to have a great influence on the architecture of Latin America." 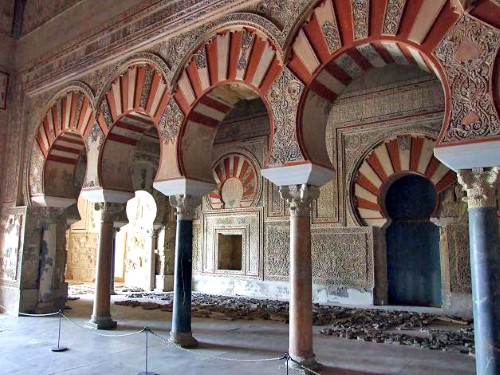 In UBEDA, the larger of the two has many magnificent palaces, including the Palacio de las  Cadenas and an interesting potters’ quarter. The Plaza Vazquez de Molina is surrounded by civil and religious buildings built from 1530 to 1580, with special mention to the funeral chapel of El Salvador and the Vazquez de Molina. These form the greatest Renaissance architecture ensemble in Spain and one of the most important in Europe.

The main elements in nearby BAEZA are the Cathedral and the Santa María Square, the Palacio de Jabalquinto, the old Seminary and the University. Known for its religious and educational uses, it became the site of the International University of Andalusia in the 1970s.