The natural park SIERRA DE LAS NIEVES is located in the hills behind Marbella and to the east of the Ronda-Marbella road as it winds up the mountain along hairpin bends.  The park centres on Mount Torrecilla and covers an area of 18,530 hectares.  The district of the Sierra de las Nieves is bounded to the south by the western Costa del Sol, to the east by the Guadalhorce Valley, to the west by the Sierra of Ronda and to the north by the district of Guadalteba.

Apart from a few villages, which form a rural mountain community, this isolated area is largely uninhabited, and has seen very little human influence or activity, such as agricultural cultivation.  For this reason, it has an unusually rich variety of indigenous flora (pine, fir, ash, chestnut, wild olive and oak trees, as well as juniper).  The park has the largest populations of mountain goat and mouflon and a relatively high population of Meloncillo, a kind of mongoose. 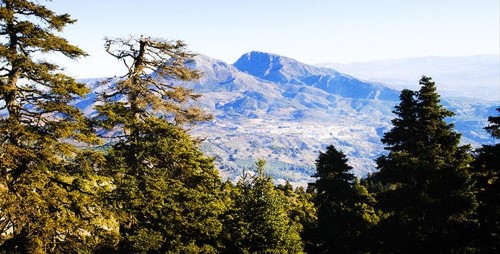 Let us introduce you to some of the spectacularly situated villages with mountain backdrop surrounding the park. Due to their rural location they are largely unspoiled and most have accommodation for the traveller.

The village of ALOZAINA is dominated by the ruins of a 14th century castle, which has remarkable views over town and vega, countryside.  The castle was totally re-constructed in 1951, and only a small part of the original walls and a Moorish tower remain.  The town of Alozaina stretches from the Rio Grande Valley to the top of Sierra Prieta, putting the valley lands in contact with the eastern mountains of the Serranía de Ronda.

This elevated position on the western edge of the Guadalhorce Valley allows Alozaina to enjoy a varied natural landscape.  One of its most beautiful places is La Ventanilla on the slopes of Sierra Prieta, from here you can see a magnificent panoramic view of the Guadalhorce Valley.  The urban structure of the town of Alozaina inherits its Muslim origin, especially in its oldest part, with sloping, labyrinthine and narrow streets, sometimes dead ends, with gleaming white facades and hidden corners, dominated by showy and striking flowers.  Alozaina is said to the first town in Spain to start harvesting green table olives, at present this is the main source of income for the economy of the town

The postcard-pretty town of CASARABONELA is located on the foothills of Sierra Prieta and next to the Sierra de Alcaparain.  It has a Moorish style with narrow labyrinthine streets and white-washed houses overlooking the valley.   Olive groves and cereal fields abound on the land, while around the town the land has been adapted for the cultivation of fruits and vegetables.  The archaeological sites of Los Villare, an old medieval town, the cave of Yesera and the small waterfall of El Chorredon are just some of the places worth visiting. 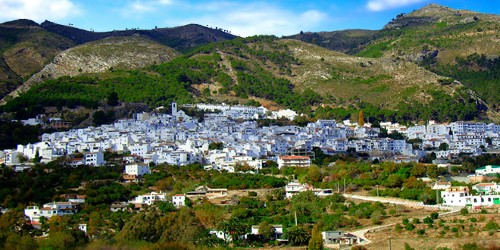 The quiet hamlet of JOROX is just off the A366 between Alozaina and Yunquera and as the name suggests was a Moorish settlement, well placed on a flat knoll but still a well-defended site. Three of its sides have steep banks leading down to the mountain streams, which until the 1970s powered numerous mills.  Today Jorox is a dying hamlet, as much rural life left after the arrival of electricity 30 years ago. Until then, the fast flowing streams of the River Jorox were the source of energy that powered up to nine flour mills.  Jorox was the place to bring grain to be ground for the daily baking. The wealth this brought to the village enabled it to build its own church and a school. As electricity replaced waterpower, so the mills closed and the population declined.  The old school room can be seen on the side of the road and the chapel is at the top of the knoll, originally the centre of the village.

The mountainous town of EL BURGO, situated to the northeast of the park, is the gateway to the Ronda region nearby.  Located between Ronda and Coin in the middle of the valley, olive and cereal fields predominate its lands in contrast to the pine forests that cover most of the lands located at the foot of the mountains.  Of the mediaeval castle which gave rise to the village, only a few sections of wall remain, now interwoven with the houses of El Burgo's upper district; standing within what must once have been the castle grounds is Our Lady's Parish Church.

Just outside the village is a vantage point which is home to the game wardens monument offering magnificent views of the gorge of the Lifa Valley, the ruins of Santo Desierto de las Nieves Convent and Fuensanta waterfalls and mill.  In more recent times, the village is associated with the romanticism of the highwaymen of the Serrania de Ronda.  El Burgo was the birthplace of "Pasos Largos", alias Juan Mingolla Gallardo, the last of the bandits who still roamed the mountains as late as the beginning of the 20th century.

GAUCIN is the first Serrania de Ronda village encountered by the traveller on the road which links the Campo de Gibraltar region with Ronda itself and displays all the charms of the white villages which, from here onwards, can be seen nestling in the mountains through which the River Genal flows.  The landscape is of varied nature and its Moorish streets are perfectly adapted to the hill on which they are built. The typical white-washed houses are boldly decorated with grilles and balconies expertly crafted from wrought iron.

At the top of the village is the centuries-old El Aguila Castle, which is aptly named, as from it the eagle-eyed can view the African coast, Gibraltar, the River Genal and the open countryside which marks the final descent of the Genal as it meets the River Guadiaro.

ISTAN to the south of the park is famous for its pure, clear mountain water.  It is one of a number of villages of Moorish origin and owes its survival to the distance from the coast.  After the Christian Reconquest of the Iberian Peninsula in the 15th Century, Arabs were barred from living within a league of the shoreline in order to prevent them from communicating with their kinsmen across the straits in Morocco.

As with so many mountain villages, the only practical means of transport was the mule and the pack horse, Istán's streets are narrow and unsuited to the motor car.  The village has the timeless air that outsiders find so appealing and the only sensible way to experience it is on foot.

MONDA is situated in a mountain valley just 15 km away from Marbella.   The village's dominant feature, which stands out for miles around, is the large stone building which stands atop the tree-covered hill above the village.  Although this resembles a fortification, it is in fact a superbly-located and traditionally-styled modern hotel, CASTILLO DE MONDA, built on the site of the Moorish CASTILLO DE AL-MUNDAT.  Monda has a small central village square, Plaza de la Ermita, with the Monument to the Miner.  Just outside the square is the preserved Fuente Lavadero de la Jaula.  There is small museum Casa Museo Marigloria near the Iglesia de Santiago Apostol. Castillo de Monda overlooks the village.   Just outside the village is the Calvario, Roman road and olive oil mill. 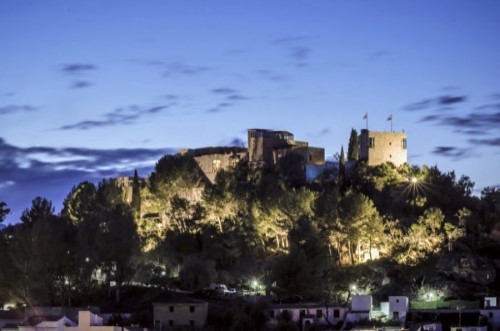 OJEN is a town of Moorish origin located between the sea and the Sierra de las Nieves and less than 10 km from the beaches of Marbella.   Water is one of the symbols of Ojen, and strolling through the center of town, you will find the Fountain of Chorros.  Lovers of history and architecture will enjoy the historical sites, monuments of heritage value and a path of clear Moorish reminiscence that you will find on your way through Ojen.

The karstic natural monuments of the Caves of Ojen have been linked to village life for centuries.  Although in the beginning, they were used as places of refuge for animals and people, today, they are part of a garden in which the acts, concerts and events are often held.  The old part of town spreads down the mountainside on the other side of the road.  The cobbled streets are narrow and well-served by welcome drinking fountains.

Close by, in the Serrania de Ronda, is the Refugio de Juanar.  Originally the private hunting lodge of the wealthy Larios family, and a favoured retreat of King Alfonso XIII, this former Parador is now a private hotel popular with tourists and hunters.

The steep hillside village of TOLOX dates from the 10th century, and lies to the east of the park.  The white houses, long streets and flowers come together to create a picturesque urban ensemble. One of the biggest reasons people visit Tolox is the Fuente Amargosa Thermal Spa, the only medicinal thermal Spa in all of Spain.  The Spa was opened in 1869 and re-built after a flood at the start of the 20th century. This spa mainly treats inflammatory skin conditions, allergic reactions in the skin, chronic coronary artery rheumatisms and chronic inflammatory respiratory processes. These waters, unlike other natural springs, are not suitable for drinking, rather it"s the gases that come from the springs that the spa uses.

Walking through TOLOX town centre you will find the Plaza Alta, and it's majestic houses. Amongst them are the Casa de la Inquisición and the Casa del Hidalgo Fernández de Villamor, dating back to the 16th century and sporting iron bars on their whitewashed frontage.  The chapel of San Roque, Patron Saint of the town, is 3 kilometres from the city centre and is surrounded by unbeatable views. The Virgen de las Nieves chapel is situated in a building right in the heart of Natural Park Sierra de las Nieves, surrounded by dense pinewood.

YUNQUERA, to the northeast, is a popular gateway to the park.  Look out for the Moorish water system, still in use today.  Set below the heights of the Serranía de Ronda and the start of the Hoya de Málaga range, this pueblo sits between El Burgo and Alozaina on the Ronda-Málaga road.  The surrounding peaks reach over 1500m and winter snows cover them for two or three weeks each year. Though the village itself is only 681 metres above sea level, the surrounding irrigated valleys are considered to be the source of the watered Río Grande

IGUALEJA, to the west is the largest village in the Upper Genal and is well-known for its chestnut trees and its tough residents.  The centre of the village is dominated by the church and there are two smaller barrios.  The village is built on various levels which explain the steep and winding streets with houses strung along in typical medieval style.

Before entering the village by a small bridge, a small road leads down to the Nacimento Genal (source of the River Genal).  The clear waters flow from a small cave and into a number of pools, before finally running into a stream.  La Fuenfria is a quiet secluded spot ideal for a picnic, next to a natural spring and set in a clearing surrounded by forest.

The bandit Flores Arrocha used to stalk this road as it was the main highway , until he met his death in 1932 further down the track towards Benahavis.   Therefore, the Guardia Civil kept a constant presence on the road with various staging posts. When entering Fuenfria Bajo after a walk of two kilometres, a line of poorer deserted homesteads can be seen. A climb of one kilometre to Fuenfria Alto reaches the main Cortijo, the Guardia Civil post and one or two outlying rural ruins. 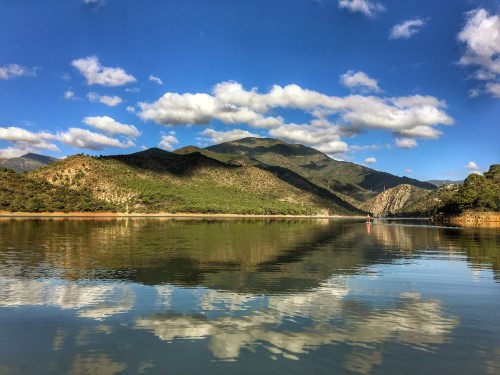