Jaen - The Gateway to Andalucia

JAEN is the gateway to ANDALUCIA, a dreamlike landscape for anyone passing through the Despeñaperros ravine which leads to the south. A green patchwork of mountains, farmland and fertile plains dotted with sixty million olive trees. The climate is temperate during spring and autumn, summers are usually hot, especially in the south, and the winters are harsh and extreme in the mountain areas. The economy of the province is based on agricultural around olives and olive oil, and the interior on tourism. Jaen is the world's largest producer of top quality olive oil.
Jaén still lives up to its original Arabic name, Yayyan, referring to its role as a crossroads for caravan routes in medieval Moorish Spain. The city of JAEN is located in the foothills of the Sierra Magina, the craggy heights of Santa Catalina castle, a former Arab stronghold and looms over the city and at the foot of the castle lays the OLD TOWN, where the narrow, rambling streets are full of Arab influence. To fully appreciate this beautiful city, start by walking at the PLAZA DE LA MAGDALENA, continue on to Calle Santo Domingo where you will find the PALACIO DE VILLARDOMPARDO, where underneath are remains of Arab baths, unique in Spain for their design and preservation.

In the PLAZA DE SANTA MARIA the Renaissance Cathedral dominates the square, and also the Town Hall and Bishops Palace can be found here. Behind the Cathedral, Calle Bernabe Soriano leads to one of the oldest temples in the capital, the church of San Ildefonso. There is so much to see in this beautiful, fascinating city that one day is not enough, you will simply have to stay awhile!

The cities of UBEDA & BAEZA situated in the very heart of the province of Jaen and preside over the region of La Loma, a wide expanse of olive groves in the high valley of the Guadalquivir. Antonio Machado, a great poet, compared them and said "BAEZA was a poor lady and UBEDA a queen and a gypsy."

UBEDA – THE QUEEN has a wealth of unique examples of the arrival of RENAISSANCE in Andalucia as you can see from the streets packed with churches, palaces and stately houses. There are 500 buildings listed as historical or artistic interest and a great number of private houses are noted for their beautiful patios full of light and flowers. At dusk buildings and the main square light up giving the impression that you have suddenly jumped back four centuries. Located at the entrance to the town is the HOSPITAL DE SANTIAGO which has a luminous cloister and high chapel. The PLAZA DE SANTA MARIA is considered one of the most outstanding historic artistic ensembles in the region.

The outstanding feature of UBEDA is the monumental square, the Plaza de Vazquez de Molina, in the OLD TOWN surrounded by imposing buildings such as the Palacio de las Cadenas (so named for the decorative chains which once hung from the facade). The El Salvador Chapel, Santa María de los Reales Alcázares Church and Las Cadenas Palace will take you back in time to the most grandiose days of Ubeda's history.

UBEDA awaits you to share her monumental wealth with you, the delicacies of Mediterranean fare and the sea of olive trees that permeates every space.

BAEZA – THE LADY lies perched on a cliff in the Loma de Úbeda, the range separating the Guadalquivir River to its south from the Guadalimar to its north. BAEZA awaits to share her monumental wealth with you, the delicacies of Mediterranean fare and the sea of olive trees that permeates every space.

Tiny, compact and provincial with a kind of perpetual Sunday air about it, the quiet streets retain a medieval feeling. At its heart are the combined PLAZA MAYOR and the PAESO, flanked by pavement cafes, but delightfully low key and atmospheric. The PLAZA DE LEONES is a particularly attractive cobbled square enclosed by Renaissance buildings and stands slightly back at the far end. Here on a rounded balcony the first mass of the Reconquest is reputed to have been celebrated, the impressive mansion beneath it houses the tourist office.  In the centre of the square is the FOUNTAIN OF LOS LEONES, the statue of the woman above is said to be the wife of HANNIBALL.

Many other palaces and ancestral homes will guide you through this town, birthplace of nobles and aristocrats. The finest palace is the MARQUESSA DE JABALQUINTO, with an elaborate Isabelline front, beautiful patio and staircase. The building is now the site of the International University of Andalucia. Just above is the 16th century Cathedral the novelty being huge silver CUSTODIA cunningly hidden behind a painting of St Peter which whirls aside for a small donation.

Close by is a building where the great Anadalucian poet ANTONIO MACHADO taught French. A plaque outside a corner house on Plaza Cardenal Benavides records where he lived. From Los Alitores Gate there is a magnificent view over the whole Guadalquiver and the Majena and Cazorla mountain ranges. As twilight falls visit the Palacio de Jabalquinto, with a beautifully decorated facade and buttresses in Plaza de Santa Cruz, and let yourself be transported back over the centuries. 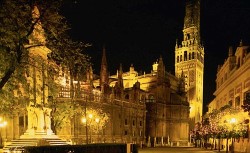 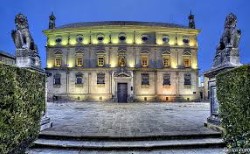 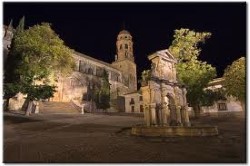 In the northern part of the province the mountains of DESPENAPERROS rise and extend west towards the SIERRA MORENA, and in the south the SIERRA MAGINA bordering Granda province.

The Natural Park of Sierra Magina has a wild beauty of nature under a settlement of prey such as golden eagles and the peregrine falcon, and among mammals’ mountain goats and deer sky. In this rustic enclave are a string of villages that by its medieval frontier character, appear crowned with castles and Islamic fortresses, monumental churches, like the parish church of Huelma of cathedral dimensions, palaces and buildings of civil character that speak of glorious historical past.  It has beautiful charming towns like Jodar, Belmez de Moraleda, Torres, Cambil, Pegalajarm Jmena and Albanchez Magina.

SILES borders the province of ALBACETE. Much of the municipality is located within the Natural Park of SIERRA DE CAZORLA, SEGURA Y LAS VILLAS. It is mainly a forest town near the river; the economy  based on olive and tourism, harvesting and sheep farming. The charm of the area is plentiful natural spaces with diverse flora and fauna.

The town of Arquillos has fewer than two thousand inhabitants and is the gateway to the rural area of El Condado to the north of Jaen. A short detour takes you to Banos de la Encina, a medieval town with a 1000 year old castle, and ANDUJAR with its interesting monuments and palaces. In ANDUJAR the Virgen de la Cabeza is enshrined in a forbidding sanctuary in the wild hill of the Sierra Morena  with the history going back to the 13th century. The MADONNA known as "La Borenita", attracts over 1 million people who get to Cerro de la Cabeza to participate in one of the most popular pilgrimages which is declared of National tourist interest.

The Guadalquivir River passes through the town and a Roman bridge with 15 arches spans the river. Segura de is the most dramatically positioned village, its whitewashed houses huddled around a hill, topped by a heavily restored castle. The village has shady silent narrow streets, unique monuments, Arab baths and a peculiar rectangular shape bullring, all crowned by the majestic Mudejar castle.

El Yelmo (The Helmet),raises its height into the sky like an impressive guardian, over the charming villages and hamlets in the valley. It is an excellent take-off for paragliding. Cortijo Nuevos is the village where the international air festival takes place every year, being the modern spot in the valley, centre & point of departure to the villages & hamlets. CHICLANA DE SEGURA is a picturesque hamlet perched on a rocky crag with houses tunnelled into the rock and has some superb views over the Tranco reservoir.

The Castle of la Yedra dominates CAZORLA, one of the most beautiful muncipalities in Spain. Located at the foot of the Pena de los Halcones, the town has been declared a historical and artistic site. The plaza de Santa Maria at the foot of the fortress houses the ruins of a church. A few kms along the road that rises to the limits of the natural park is LA IRUELA, a small village of picturesque climbing houses, presided over by a Templar castle, constructed on the site of a Moorish fort following the Christian conquest.

QUESADA lies in the shadow of the hill referrred to as La Magdalena.  The old quarter is filled with narrow white-washed streets where there are picturesque features. The painter Rafael Zabelta, a friend of Picasso, was born in Quesada and there is a museum housing his work. The Sanctuary of the Virgen de Tiscar, the patroness of Quesada, lies in the shadow of the castle bearing the same name, an old Moorish fortress that once formed part of the defensive line of the now lost Kingdom of Granada. A religious procession takes place on the first Sunday of September.

Outside of CAZORLA are the hauntingly beautiful Sierra de Cazorla, Segura and Las Villas Natural Park and the Sierra de Castril.

From Castril take a drive up to the Embalse del Tranco and across on a small road to join the main road for Villacarnillo to UBEDA and BAEZA and on to JAEN city. This mountain wilderness is a refuge for golden eagles and tawny vultures and home to wild boar, deer, fallow deer and the Spanish Ibex and boasts many species of native plants.

30 kms away is the town of MARTOS set amid endless olive groves at the base of an imposing cliff, formerly inhabited by Iberian tribes. The municipality produces more olive oil than anywhere else in the world and celebrates the Olive Fiesta where you can witness the process of extracting the first olive oil of the year and see villagers dressed in regional costumes of bygone era.

Lastly we visit ALCALA LA REAL the frontier town, key to the valley of the Guadalquiver and the fertile plains of Granada, and its coat of arms has a key right in the middle. It was from here that FERDINAND and ISABELLA rode out in order to receive the keys upon surrender of Granada. Large rocks form part of the walls of La Mota Fortress which consists of Alcazaba and abbey church; here 7 doors lead down to the town where you find the old military quarters of the Muslim era and many other fascinating features. 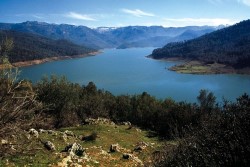 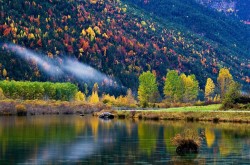 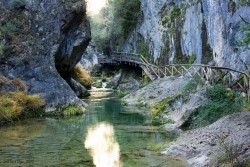