Once Upon a Time in Almeria 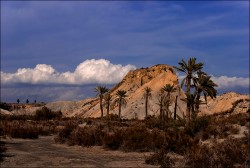 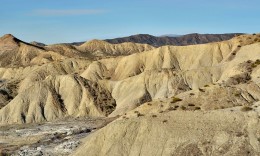 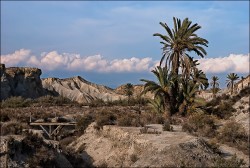 The dusty terrain and lunar-like landscape of Almeria province routinely served as a stand-in for Texas, Mexico and numerous other towns populated by gunslingers of the Old West. The Tabernas Desert, which covers almost 280 square kilometers and resembles the American West in both climate and landscape, was where Sergio Leone filmed his famed Clint Eastwood trilogy, “A Fistful of Dollars”, “For a Few Dollars More” and “The Good, the Bad and the Ugly”.

Movie fans will recognize the whitewashed buildings  and dusty streets of Los Albaricoques as being the pueblo of Agua Caliente in the Clint Eastwood film “For a Few Dollars More” and have now become a very popular destination for Western fans over the years. The final shoot out in the film “For a Few Dollars More”  took place in the centre of Los Albaricoques.

Old structures and buildings from the time of the shooting have been renovated; signs have been put up and now the primary source of income for Los Albaricoques, a hamlet in the Cabo de Gata-Nijar Natural Park.  A lot of the characters in the films were actual residents of the town. Although these films where filmed over 50 years ago the residents are very proud of its heritage. All the streets are named after characters that where in the trilogy.

The Tabernas Desert is a protected natural park where nature lovers, hikers and people looking for exotic American-like scenery fall in love with this wild barren landscape. The dusty badlands between Tabernas and Gador bring to mind dark tales from Arizona, California, and the Wild West.

The desert has attracted film crews since the 1950s and the unique landscape has brought wealth and fame and made the area known worldwide. The really big breakthrough for the Andalusian desert as a film set came with the filming of “Lawrence of Arabia”, considered one of the best historic and epic films ever made. It was shot in shot in breathtaking scenarios such as Cabo de Gata, Carboneras and Mojacar.  Nicolás Salmerón park was also used to recreate the exit of the Arabs from the city of Damascus. 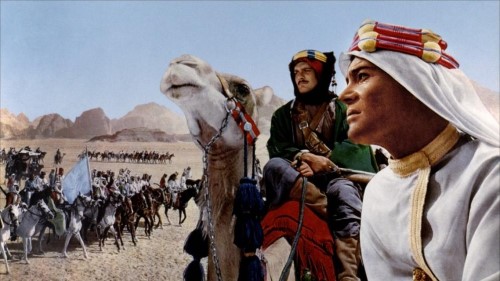 Parts of "Indiana Jones and the Last Crusade "(1989) were filmed at Escullos beach in San Jose, the Rambla del Buho and the Tabernas Desert.

American Director Ridley Scott chose Almeria province to shoot some scenes for "Exodus: Gods and Kings" (2014). The Sierra Alhamilla, the desert of Tabernas (particularly, the Rambla Viciana and the desert of the Buho), the Cinto hill, Níjar and the Gold Mines of Rodalquilar, as well as the marble caves of Macael saw actor Christian Bale and Spanish actress María Valverde act.

The film village of Fort Bravo is picturesquely situated by a canyon and is only accessible by an adventurous ride through a dry valley, where you pass the border post, pay the entrance and park at the gates of the Fort, which welcomes you to the movie village. Fort Bravo is the oldest of the 14 Western villages that were built for filming here, and it's still used to this day.

Western Leone, just a few miles from Fort Bravo was originally built to film Sergio Leone's “Once Upon a Time in the West” (1968); the large red house, around which much of the scenes in the film revolve, is maintained as an attraction, along with other buildings of a Western town. It has also been used to film other spaghetti westerns.

In 1970, a fortress was built a short distance from Western Leone. This structure was used as a set for "El Condor" and later films. The fortress fell into disrepair by 1986. 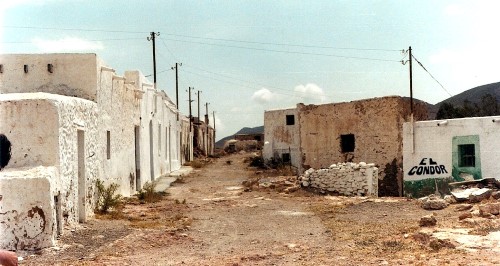 You really have to rub your eyes a little to believe that you are here in Europe. The cacti, the vastness of the terrain, the dazzling light that bathes the scene and the ghostly tense atmosphere of the film village makes the trip a memorable one.

This land has seen some of the greatest legends of the silver screen, such as Charles Bronson, Claudia Cardinale, Brigitte Bardot, Clint Eastwood, Steve McQueen, Yul Brynner, Faye Dunaway, Sean Connery, Bud Spencer, Terence Hill, Gregory Peck and Harrison Ford, they have all re-enacted their stories in the Andalusian dust. All the greatest gunslingers in film history have filmed here in Spain.