The province of HUELVA is Andalucia's 'SECRET GEM" just begging to be discovered. Its wide, white, sandy beaches are perhaps among the best in Europe and two thirds of Huelva is designated national park, yet the region remains largely off the tourist trail. Andalucia's most westerly province draws much inspiration from its glorious past and its epic natural surroundings. The most least visited province, Huelva borders Portugal and Extremadura, as well as the Atlantic Ocean.  It is the 3rd sunniest province in Andalucia and one of the greenest producing superb strawberries having the most wonderful taste.

The city of HUELVA is located at the mouth of the Odiel River in an area of marshes where numerous itineraries depart leading to the protected reserves in the province. The city has many lovely monuments -  in the old quarter are narrow streets and small squares where it is possible to sit and enjoy the peace and sunshine. The Mirador del Conquero, in the Plaza de las Monjas, you can look upon a lovely view of the city and its surroundings and it is possible to see from here the Marismas del Odiel, a natural environment of marshes of great importance to migratory birds.

The Museo Provincial de Huelva displays Roman artefacts showing the importance the city had in that period and there is a room devoted to the discovery of America. There is also information on the history of the nearby Rio-Tinto mines where iron and copper are still extracted today. The city even has a British district, the Queen Victoria neighbourhood, built to a British design in the early 20th century to house workers at the Rio Tinto mines.

The DONANA NATIONAL PARK is located primarily in Huelva province although an important part lies in the province of Seville. The marshlands of the Donana amount to 50,720 acres with travelling dunes, unspoiled beaches of fine white sand, pine forests and the area known as the Vera - a land in transition between two ecosystems, form the remainder of this singular environmental complex. In Sanlucar de Barrameda the Donana can be entered aboard a boat which makes the journey between both banks. The Donana is a paradise for nature lovers and for centuries was linked to the Duchy of Medina Sidonia and Alba. Deer, fallow deer and wild boar roam this protected reserve and the Iberian Lynx has its last refuge in the Donana. Punta Umbria is the largest resort on the Costa de la Luz and the nearest to Huelva City. It has some magnificent beaches and great seafoood restaurants.

Several km from Huelva PALOS DE LA FRONTERA where from here COLUMBUS set sail in three ships for the NEW WORLD. The Monastery of La Rabida, a Gothic-Mudejar temple, is one of the most important sites linked to COLUMBUS; it is here that he spent his last night before starting out on his journey to the "EAST INDIES".

Huelva is famous for its its wide, white, sandy beaches, perhaps among the best in Europe and two thirds of Huelva is designated national park, yet the region remains largely off the tourist trail. Andalucia's most westerly province draws much inspiration from its glorious past and its epic natural surroundings.

The Playa de Castilla east of Matalascanas, runs alongside the DONANA, a 25 km stretch that is only accessible by foot. Visit for its pleasant squares and pretty, narrow pedestrianized streets in the old quarter.  Next along the coast is the popular resort of Islana and the fishing port of Isle Cristina surrounded by marshland, and further east is Antilla La Antilla and the tiny port of El Terron. Here are some fine views across the Piedras river estuary to the fishing village of El Rompido and the nature reserves. Ancient chronicles tell the legendary reign of the Tartessians was established here, but there is no real evidence to prove this, only a few Roman ruins are scattered throughout the wetlands, along with some 16th century watchtowers which serve as a beacon for boats entering through the mouth of the Guadalquivir. 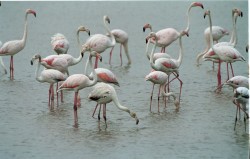 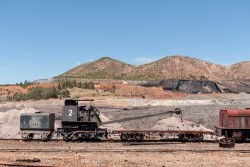 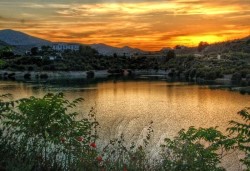 The RIO TINTO mines, which still extract copper and iron are certainly worth visiting.  NERVA is located 4km east of MINAS DE RIO TINTO, and its fate has been similarly entwined with that of the famous mines. The mine you can visit as part of the Mining Park, Peña del Hierro, is located within the municipality of Nerva. As well as its mining heritage, Nerva has Roman remains in Las Arenillas; in fact, the village takes its name from the Roman emperor Nerva, who ruled briefly in the 1st century AD.

The CERRO DEL MORO mine was used for silver from the 1st century BC (you can see a fragment of this silver, as well as a carved Carnelian ring found nearby, in the Mining Museum in nearbyLAS MINAS DE RIOTINTO), but mining stopped in the second half of the second century AD. Some remains were confirmed by mine archaeologists as being from the second century BC. Even further back in history, there is a dolmen, known as La Lancha, where various vessels were found, now also on display in the MINING MUSEUM, plus the Neolithic burial ground of Cistas de la Parritam, west of the village.

Among the abundant archaeological remains found in CAMPOFRIO are several graves, ruins of houses and even a water tank in the Cerro de los Cobullos, suggesting a settlement during the late Bronze Age.  It is believed that the fortress was built by KING SOLOMON, seduced by the breath-taking metallurgical wealth of the area, as described by Father Juan Pineda in 1609 in his work "HISTORIA DE REY SALOMON".  CAMPFRIO also has remains of the Roman road that joined the mines of RIO TINTO with Emérita Augusta, crossing the Rio Odiel via a magnificent bridge that still stands today, as well as graves and a necropolis in Risco del Tesoro.

In the north are the beautiful parks of SIERRA DE ARACENA y LOS PICOS DE AROCHE. The Sierra de Aracena is famous for its rearing of black Iberian pigs which can be seen everywhere, particularly under cork and holm trees, where they search for acorns that give the ham its distinctive flavour & quality. The pasture beneath these trees, referred to as dehesa, provides for deep pools of shade for the pigs, and provides several harvests. The most important are acorns which fall in autumn and provide food for the pigs. The pigs are then fattened and killed, and the meat is air cured giving the much-prized jamones of Jabugo.

The Sierra de Aracena y Los Picos de Aroche Natural Park encompasses 184,000 hectares, 90% covered by woodland of mainly Mediterranean oak. There is a rich and varied wildlife and the landscape is full of contrast with gently rolling hills and wooded valleys gradually giving way to dramatic rocky outcrops on high peaks. The white washed towns and villages, often huddled round a large church or castle, are dotted around the Sierra which is only one hour from Seville. There are centuries old drover's paths making it easy to explore the region on foot.

JABUGO is the village with the most sought after ham and where the biggest ham producer, Sanchez Romerao Caravjal, is found. ARACENA is the largest town and famous for its limestone caves, the Gruta de las Maravillas, one of the biggest caves in Spain.  There are twelve caves underneath the castle hill with underground lakes and dramatic limestone formations and they are open to visitors. The Portuguese drove the Moors out of Aracena in 1251 before handing the town over to the Castillians in 1267. The Knights Templar controlled the town until 1312 when the Order was dissolved.

North east of the town is the Embalse de Aracena reservoir where you can picnic on the shores and cool off in the summer shade by gall oaks and have a dip in the lake. ALAJAR at the foot of the Pena Arias Montano is the site of many old legends full of mystery recounted by the townspeople. Higuera de la Sierra, Zufre and Santa Olalla del Cala are living examples of architecture in the region.

The village of CORTEGANA has a Mudejar church that has been declared a National Monument and on the way to ALMONASTER LA REAL a succession of towns and villages are found on the steep slopes. The road starts at Almonaster and leads to Santa Ana la Real, a white town that embodies all the regions of Arab character. 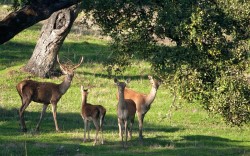 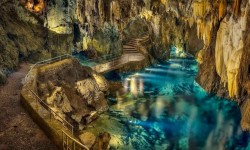 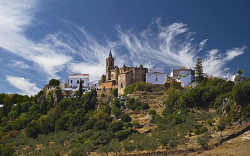 Follow in the footsteps of Christopher Columbus in Huelva, the Secret Gem, in this mysterious south-west corner of Spain