Almeria - the Spice of Life in Andalucia - where Africa meets Spain.

Almeria, the name means "Mirror of the Sea" in Arabic, was one of the most important Islamic ports during the period of the Caliphate of Cordoba. Located in the far south western corner of the Iberian Peninsula Almeria is the sunniest province with over 300 days a year of sunshine.

Despite the rugged landscape, Almeria has a good irrigation system and the sub-tropical climate produces an abundance of all kinds of fruit & vegetables, most of which are exported from the port.

The city of Almeria is large and modern with a wealth of history from the time the Phoenicians founded the town through to the Moors, and finally Ferdinand and Isabella recovered it for Spain during the Reconquest. The Alcazaba, a fortress built on the crest of a hill, is silent testimony to the grandeur once enjoyed by Almeria. At the foot of the fortress lies the old town, its Arab character reflected in the older neighbourhoods. The Cathedral was conceived as a fortress and has four massive towers and tiny windows, next to the Cathedral are the Bishops Palace and Convent of las Puras. The Alcazaba, built in 995, the cathedral and the caves in the old gypsy quarter are just some of the places worth visiting. Half of Almeria is Spanish and half African making it quite unique, there is a ferry port serving Africa.

Much of the province is comprised of semi-arid desert-like landscape. The desert Sierra de los Filabres is the site of the famed observatory Calar Alto and opens the way to the desert, the only one of its kind in Europe.  The villages rely on the extraction of marble from the surrounding rock to provide their main income. Castro de Filabres is located on a stream bed on a southern slope of the Sierras and preserves its Moorish origins in appearance and an unusual feature is that the village buildings are made of slate.

GERGAL is a beautiful town in the Sierra de los Filabres, beside the road from Almería to Granada. Gergal was a fortress that ruled the crossroads that connected Finana with Tabernas and Almeria with the western part of the Filabres. The distribution of its steep streets along the hillside, their white houses with roof and chimney, the Mudejar Church dominating the whole, its urban structure, in short, retains the characteristic features of its Arabic origin.

Dominating the town the Castle-Alcazar dating from 1509 is perfectly preserved. In its basement, cells where Moors prisoners who were to be transferred to the Chancery of Granada overnight, are still preserved. Declared a National Monument, it is now in private hands. 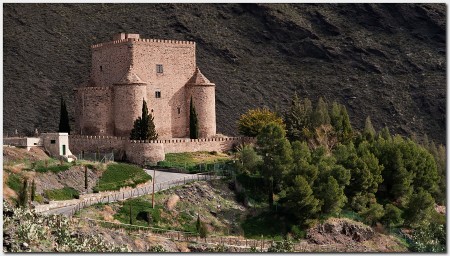 The Sierra de Alhamilla is the last mountainous object before the desert and the Karsdt in the Yesos de Sorba is a geological formation carved by nature. The village of Alcudia de Monteagud, situated in a rural, arid setting, has narrow labyrinth like streets with white houses and sits on a rise where it dominates the Tahal Valley.

The TABERNAS DESERT is an arid area which creates a curious contrast of vegetation of prickly pear, agae and palm trees. The area has been used in dozens of films of the American West including “Cleopatra”, King of Kings”, "Patton” & “Lawrence of Arabia”. The Tabernas Desert has often been portrayed as Arizona and has been used in the spaghetti westerns such as “A fistful of dollars” & For a few dollars More”. The town of FAR WEST has served as many a film set and in Fort Bravo Texas Hollywood is where you can act out your cowboy fantasy and follow the trail of "The Man with No Name" or prop up a bar in the saloon and watch a reenactment of a gunfight and bank robbery. As well as the Wild West town there is a fort, Mexican village and Red Indian reserve. 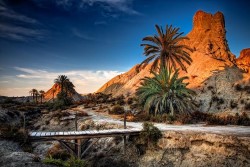 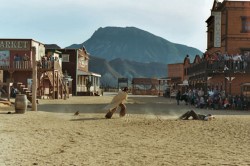 The Almanzora Valley has an abundance of citrus and fruit trees, many quaint and white washed villages with narrow streets. In Purchena there is a wealth of history with a legacy left from its past in the ruins of the Torre del Aguan, the Alcazaba and the 16th century Parish church. Tijola, known as the “Pearl of Almanzora”, stands on a beautiful, fertile plain in a valley formed by the Sierra de las Estancias and the Sierra de los Filabres, it has a Mudejar style church and several archaeological remains. Nestling on a hillside with a 13th century castle is the village of Seron, rich in heritage and has been settled since prehistoric times.

Almeria has a coastline of 214 kms with many fine empty beaches, tiny hidden coves with their crystal clear water area a mecca for tourists looking of a little peace and quiet away from the bustling Costa del Sol. Roquetas de Mar is a typical fishing village where you will find ruins of the castles of Santa Ana and Los Bajos. Further along is the town of Adra, a former Roman colony with a fortress overlooking the town, only the towers and walls remain but it is worth visitng. Here the beaches are long and wide and the coastal lagoons a haven for birds. The fishing town of Aguadulce on the eastern coast is less populated and it is here that the park interrupts the coastal strip with its nearly deserted beaches and secluded coves.

The beautiful Cabo de Gata - Nijar Natural Park is one of Andalucia's most outstanding wildlife areas and has some beautiful deserted beaches. Cabo de Gata Nature Park has 45 kms of nearly deserted coastline and presides over a volcanic landscape which records its highest point in the Sierra de Gata. Travelling dunes, salt marshes and hidden coves are in this semi-desert, the most famous beaches are Genoveses and Monsul, as well as Arco in the town of Los Escullos and Penon Blanco next to the La Isleta del Moro.

The Cabo de Gata lighthouse next to the lookout called the Mirador de las Sirenas, rises over the southernmost promontory of the park that serves as the starting point for a number of itineraries. The lighthouse, Faro de Cabo de Gata, marks the cape's southern tip and on a clear day you can see the Rif Mountains of Morocco. There is a bird watching observatory where it is possible to see a large variety of migratory birds.

The Parque Natural Cabo de Gata is where the stark landscape of eastern Almeria dramatically meets the Mediterranean and where the originally volcanic Sierra de Cabo de Gata plunges into the clear, azure waters. Here are some of the most beautiful beaches strung between coves and cliffs of the most awesome grandeur.  There are no real towns only a scattering of villages and San Miguel de Cabo de Gata has lovely coarse sand, small fishing fleets and the Laguna de Rosa, a large lake that is home to flamingos and other waders.

Almeria is one of the least visited Provinces of Andalucia and has so much to offer the resident and tourist alike, especially the long hours of sunshine and warm climate. The skies are so clear and full of stars on a clear night they twinkle like millions of diamonds.

We have a good selection of properties for sale in Almeria come and visit us to see for yourself.

"You can shake the sand of Almeria from your shoes, but Almeria will never leave your sole"