CAVE HOUSES have been carved out of the rocks of Andalucia since the Moorish invasion.

For the last few centuries, right up to the 1960s, tens of thousands of cave houses gave shelter to farm workers, their families and their livestock. In the late sixties, with the mechanization of farming and the advent of mass coastal tourism the local population saw a drastic decline and many a cave house was abandoned. 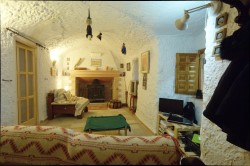 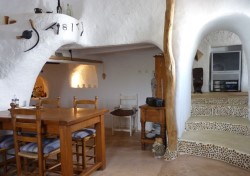 In the cave homes of forty years ago you would not find any of the modern conveniences we take for granted. In those days caves homes did not have running water or sewerage and the only electrical supply, if any, was a low power, 125 volt lighting circuit, literally pinned to the cave walls.

Tiled floors were unheard of, the floors mainly being made up of compacted earth or possibly some kind of cement mixture. Typically the ceilings of old caves were quite low, sometimes making them feel a little claustrophobic.

Most old CAVES do not have anything built onto the front of them, i.e. they consist only of cave rooms set into the ground. The main, and important, advantage of this type of layout is that the rooms maintain a more consistent temperature summer and winter. This is because the external walls at the front of the cave are usually massively thick, sometimes two meters or more only penetrated by a door and a couple of small windows. The thermal insulation properties of these cave walls are extraordinarily high.

Cave rooms do not require much heating but they do need some heat in winter for you to feel comfortable. Central heating is rarely found in caves but you should consider this if you are restoring a CAVE HOME and have the opportunity and the room to install the pipework and boiler systems. Both heating oil and LPG gas are available as fuel.

An excellent and very simple alternative is to install high efficiency electrical radiators. These are reputed to be as cheap to run as oil and have the added advantages in that they are easy to install, inexpensive to buy and can be installed only in the rooms that you want to install them in.

There is no doubt that some cave houses are naturally warmer than others. This is due partly to the natural rock temperature that varies from place to place and partly due to the orientation. Without doubt, in the winters, a south facing cave house is going to be warmer than a shady north facing property. Cave rooms do not require much heating but they do need some heat in winter for you to feel comfortable.

The traditional way to heat a cave is with an open wood burning fire. This can be a novelty for a while but they are grossly inefficient with most of the heat going up the chimney. They can also be smoky and dusty. A far better option is an enclosed log burner or a multi-fuel fire is the ultimate in fires. They are very efficient, throw out up to 12 kw of heat, clean and ecological. Additionally their design allows you to carry heat, via ducting, to other rooms.

CAVE LIFE in Andalucia has acquired enormous HISTORICAL relevance and continues to do so. The caves were lived in during as in many parts of the world but cave life was most active in the 19th and first part of the 20th centuries. At the end of this period there was an impoverishment of life in the area and cave living became associated with poverty.

However in the last ten years there has been a substantial revivial in the popularity of CAVES, first as Spanish holiday homes, then for rural tourism and now as both holiday and permanent homes for Spanish and foreign nationals alike.

CAVE HOUSES are being restored like never before and their popularity among those looking to live in THE REAL SPAIN is soaring, especially in the province of GRANADA.

You can find incredibly beautiful cave houses in Galera, Huescar, Cuevas del Campo, Castillejar and many other villages in the ALTIPLANO, a vast plateau surrounded by the Betica Mountain Range, known for its beauty and contrast. 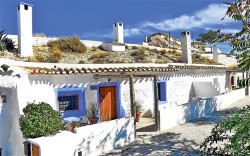 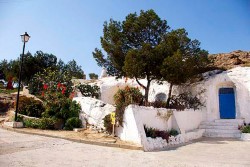 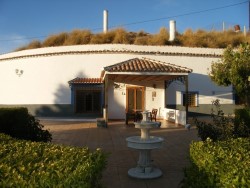 Until 40 years ago this savage and forgotten part of the province of Granada was full of small hamlets carved into the hills around the arid and barren lands formed by the drying out of the old lake. Most of the CAVE HOUSES are 70-100 years old and traditionally passed from father to son.

GUADIX is one hour from Granada’s dry landscape where wild asparagus grows in abundance and the SIERRA NEVADA mountain range dominates the skyline. Wild and inhabited since the Roman times, the BARRIO TROGLO, at the top of the town, is one of the oldest settlements in Spain, and almost half of the people of Guadix live underground.

BAZA is the main town in the area and 15 kms from CORTES de BAZA takes you to LAKE NEGRATIN, the second largest lake in Europe where water sports, swimming and fishing are popular.

Tranquility and peace, near flowing rivers and another time zone, make caves an unusual investment. So come and join the elite club and consider yourself a newly welcomed member of the TROGOLYTE family!