The Vía Verde del Aceite is now a new and attractive inland tourism attraction based on the use and recovery of the infrastructure of the old abandoned Jaén-Campo Real (Cordoba) railway as a green corridor, for cycling, hiking and other nature sports.

Built between 1882 and 1893, this train belonged to the Linares-Puente Genil line, which was dedicated throughout much of the 20th century to transporting different metals from the Jaén mines, and in particular the abundant olive oil, to the port of Malaga and the markets in the south of Spain, which is why it is more commonly known as the Tren del Aceite, or The Oil Train. The line also carried coal from the Belmez mine, as well as lead and other minerals from the mines in Linares, to the port in Malaga. Technical and trading reasons led to it being shut down in 1971, and it was eventually closed to passenger and goods transportation on the 1st of January 1985.

A "Sea of Olives" and next to nine impressive metal viaducts from the end of the 19th century, are the main trademarks of the 55 km of itinerary in the province of Jaén. The route begins in the north of Jaen city and runs alongside a railway still in operation. It then starts to climb to Martos, skirting hilly Sierra de la Grana and the peak of Jabalcuz.  The most scenic stretch begins at Martos. It runs through snaking, rolling farmland that forms a landscape of a of olive trees dotted with typical Andalusian farms that have their own olive presses for producing oil.

At Km 12 is a 104m-long bridge over a river bordered by olive groves, with superb vistas over the surrounding countryside. Between Torredonjimeno and Martos is a gentle climb through olive groves. Martos is overshadowed by its spectacular peña, a rocky outcrop towering 350m high over the village crowned by a ruined fortress. Martos marks the highest point of the vía verde, at 650m, and from here onwards it is virtually all downhill. At Km 23 is the village's old station; unlike the building at Torredonjimeno this one has been well preserved. 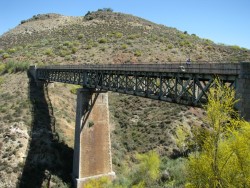 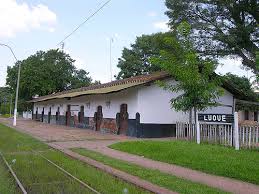 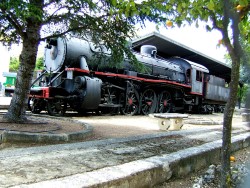 Drawing closer to the foothills of the Sierras Subbéticas, the vía verde goes across another magnificent bridge spanning the Higueral river, before arriving at a remote station, Vado-Jaén at Km 37, 7km from the nearest village. Its only purpose was as an intersection for trains. The countryside now opens out with superb views across the Víboras valley and the peak of the Ahillo mountain at 1,455m. At Km 42 the route crosses the Víboras river via another grand bridge, 224m long and constructed high over the valley. If you look down from the bridge you can see a much older bridge, dating from medieval times.

After the bridge, the vía verde passes a disused quarry which used to supply materials for constructing the railway. There are two more bridges, both 70m long, over the Chaparral and Esponela rivers, at Km 45 and Km 46. The last station on this route is at Alcaudete, at Km 48, a shady picnic spot in an olive grove. The village itself is 5km away. The greenway goes over the N321; be careful here since you have to cross the road directly as there is no bridge or underpass.

From here the greenway zigzags in sharp curves around the Desjarradero hill and over a 83m-long viaduct at the Barranco de Desjarradero at Km 52. The next and last viaduct on the route spans 200m over the Guadajoz river. From this point, the greenway continues into Cordoba province as the Vía Verde of the Subbética.