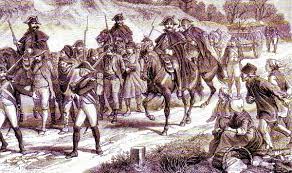 MIGUELETES- Predecessors of the CIVIL GUARD. The mountains inland from MALAGA, the SIERRA DE CAMOROLOS, were once a refuge for bandits during the 18th-19th century. Several bodies were created for rural surveillance throughout Spain in a somewhat chaotic way. The situation reached such an extreme in the reign of Ferdinand VII that he authorized the deployment of a special body called MIGUELETES in Andalusia, with several barracks in the provinces of the region. These were a rural police force (the name originated from the shotguns they carried), whose aim in life was to search out and capture the legendary BANDOLEROS of the Sierras and attempt to escort them to their headquarters in GRANADA.

The Migueletes operated until 1844 when they were integrated into the newly created Civil Guard. Hence, at the beginning of the Benemérita there were areas of Spain where some continued to call the Miguelete guards

The Civil Guard (Guardia Civil) was created on May 13th 1844 and is the oldest law enforcement agency in Spain and is one of two national police forces. As a gendarmerie force, it is military in nature and is responsible for civil policing under the authority of both the Ministry of the Interior and the Ministry of Defence. The role of the Ministry of Defence is limited except in times of war when the Ministry has exclusive authority. The corps is colloquially known as the benemérita (reputable).

It has both a regular national role and undertakes specific foreign peacekeeping missions and is part of the European Gendarmerie Force. As a national gendarmerie force, the Guardia Civil was modeled on the French National Gendarmerie and has many similarities.

As part of its daily duties, the Guardia Civil patrols and investigates crimes in rural areas, including highways (with the exception, as of 2020, of the Basque Country, Catalonia and Navarre) and ports, whilst the Policía Nacional deals with safety in urban situations. Most cities also have a Policia Municipal. The three forces are nationally co-ordinated by the Ministry of the Interior. The Guardia Civil is usually stationed at casas cuartel, which are both minor residential garrisons and fully-equipped police stations. 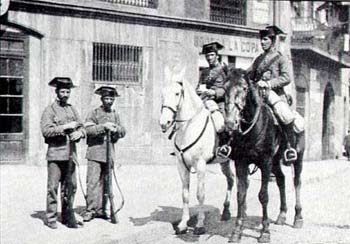