ANDALUCIA is like a woman, passionate, vibrant, alluring, and warm and sometimes with a dark, brooding side. A land of contrasts, sheer beauty, majestic mountains, olive groves and National Parks. In this fascinating and beautiful region of Spain you will find quaint villages with cobbled streets and white-washed houses clinging to the hillsides, meandering mountain streams with waterfalls cascading into crystal clear pools, verdant forests where wild flower’s grow in abundance and warm friendly people who proudly celebrate their traditions and culture.
BOREDOM is something you will never encounter as there is always plenty to see and do in this lovely region.  Ancient, historical towns full of palaces & monuments with their Arabic past retained in steep, narrow streets.  Natural Parks with ancient forests to explore with an abundance of wildlife and remote villages still locked in the past. Take a trip to BAEZA .. a town full of palaces and monuments in the Province of JAEN or BELMEZ in CORDOBA and learn about mining history of the area. To quote LORD BYRON "Oh lovely Spain! It is a goodly sight to see. What heaven hath done for this delicious land".

CAVES, CORTIJOS and COTTAGES ... we have many just waiting for you to buy and turn into your DREAM HOME.  Running through the olive groves of CORDOBA province with the wild flowers and breeze has got to be one of most wonderful experiences in spring and early summer.

DISCOVER the towns and countryside of inland ANDALUCIA and get to know the people, customs, traditions and culture of this region. For example visit DONA MENCIA... in the Subbetica in the Province of CORDOBA, famous for the wines produced in the area of MONTILLA-MORILES.
Visit the ENCHANTING PUEBLOS BLANCOS  -  "WHITE VILLAGES". Tucked away in the valleys and at the foot of the mountains, some are perched on hillsides with views of the sea, some nestle in fairy woodland, some are so hidden away that you can still imagine bandits lying in wait as you drive along the empty country roads, but they are all without exception beautiful.

FESTIVALS, FERIAS AND FLAMENCO... are part of what makes ANDALUCIA so SPECIAL, come, join with the locals, you will be more than welcome to share their special Saint's or Virgen's day with them. Federico Lorca once described FLAMENCO as “one of the most gigantic inventions of the Spanish people” and certainly there is nothing that evokes the spirit of Andalucia more completely. 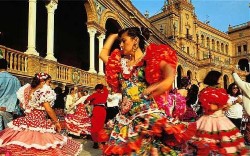 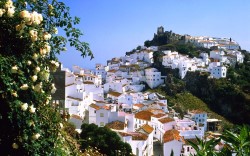 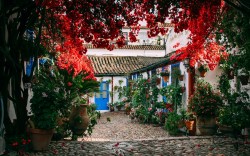 Try the local GASTRONOMY... and you will not be disappointed, every town and village has their own speciality. G is also for GRAPES which make the most wonderful wine and of course GRANADA with ghosts of its Moorish and the towering mountains of the Sierra Nevada pine clad slopes and flower rich meadows which form the backdrop of the pueblos blancos which nestle among the hills slopes.

HEMINGWAY and HISTORY... and culture and has seen the passing of Phoenicians, Romans, Moors, Muslims and the French. If you want to know where your HEART is, look where your mind wanders. There is certainly no shortage of historical sites to be visited.

You are INVITED to the village of JABUGO in the Siera de Aracena, HUELVA province to sample the famous JAMON IBERICO. Free-range black pigs roam the oak forests called dehesas and eat only acorns (bellota) and herbs during this last period to produce the best jamones in Spain and the world.

JOURNEY through our stunningly beautiful countryside and have the experience of a lifetime. Visit the lovely cities of JAEN... or JEREZ... just two of the many historic and interesting Moorish Cities in ANDALUCIA.  In the summer the entoxicating scent of JASMINE is never far away. JUZCAR very stunning like all the villages in the Serrania but it has one difference – it’s blue. This is due to the fact that the SMURF MOVIE in 2011 decided to use the tiny village as the mythical village of the tiny creatures. It has been used a few times since and voted to stay blue some years back. Apart from the many attractions for kids, based around the movie, it is also the perfect place for a walk and to see Griffon vultures and crag martins.
The KING’S PATH – EL CHORRO - walk it if you dare!!  Originally built between 1901 and 1905 annd used to transport material and people between two power stations that were built either side of the El Chorro gorge. The CAMINITO DEL REY was named after King Alfonso XIII who walked its whole length and officially opened it giving it the name CAMINITO DEL REY. The walkway was used in the Frank Sinatra film VON RYAN’S EXPRESS.

LAKES and LAGOONS.. the entire region is dotted with lakes and reservoirs criss-crossed with rivers. From small lagoons such as FUENTE DE PIEDRA in Malaga province, full of wildfowl and birds and famous for the flasmingoes, to the larger lakes like the LAKE OF ANDALUCIA in IZNAJAR, Cordoba province, for swimming, picnic and water sports and in CADIZ Lake Zahara offers spectacular views of the SIERRA DE GRAZALEMA, whilst at CASCADAS DE  HUEZNAR you can swim in the waterfalls -  there is something for everyone.

MALAGA, the second largest city in Andalucia enjoys a privileged situation with sandy beaches a mere stone’s throw from the city’s commercial centre. Malaga is known for its museums and art galleries, particularly the PICASSO MUSEUM in Plaza de la Merced, the birthplace of Malaga’s son ,PABLO PICASSO. The ALCAZABA fortress is one of the largest Moorish fortresses in the area and a circuit of walls connects it with the GIBRALFARO CASTLE from where there are panoramic views of the city and coast.

NOWHERE in Spain is there a region as diverse with so much to do and see as in ANDALUCIA.  Nearly a fifth of Andalucia is protected reflecting the unspoiled nature of its countryside. There are NATIONAL PARKS and NATURAL PARKS full of rugged landscape, oak forests and wildlife.

OLIVE OIL - LIQUID GOLD olive farming is the very essence of Andalucia and Spanish CUISINE and Andalucia has the best in the world. The sun drenched landscape on which this healthy, tasty and exotic little fruit grows, the color and passion which is everyday life in Southern Spain.
The PEOPLE are kind and friendly and will invite you into their homes and hearts. Enjoy with them their zest for living whether it is in the smallest village or the larger towns there is always something going on to which you will be invited.
QUESTION yourself as to WHY you are not already living in ANDALUCIA, or to be more precise in QUESADA... in the Province of JAEN, undoubtedly one of the jewels in our crown.

There are many ROMERIAS throughout ANDALUCIA the greatest pilgrimage in Spain is EL ROCIO, CADIZ, a riot of joy and colour. Feel the true spirit of EL ROCIO, the mixture of inseparable sensations: joy, songs and the fiesta atmosphere, offset by tears, sighs, silence, promises and the open expression of emotion,... Endless processions of canvas-covered coaches adorned with flowers await the pilgrims in the village of El ROCIO.

The SUN shines for over 300 days a year in ANDALUCIA and with it comes STORKS, SWALLOWS and the sounds of nature where the summit of the mountains joins the sky. If it is SNOW you crave for there is no better place than the SIERRA NEVADA SKI RESORT near GRANADA. Andalucia is the only place where you can ski in the morning and swim in the sea in the afternoon.

TRADITIONS... are very important to ANDALUCIANS and the family structure is extremely close knit and consists of the all the extended relatives. The social life in Andalucia is easy and laid back. The people enjoy long SIESTAS in the afternoon and the business, offices and schools shut down for a couple of hours or more. The region celebrates a wide variety of festivals and fiestas which include patron saint’s day fiestas, harvest festivals, wine festivals fairs, etc. 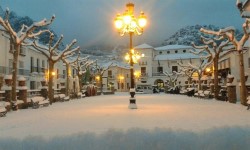 UNIQUE ANDALUCIA – an experience not to be missed, never forgotten and you will return time and time again to visit the towns just like UBEDA full of lovely mansions, palaces and full of character and history. Come and be completely seduced by the sheer splendour of the city of CORDOBA... or why not visit the delightful and enchanting coastal regions of the COSTA TROPICAL...or the beautiful wild open beaches of the COSTA DE LA LUZ... on the Atlantic side .
Come and listen to the VERDIALES... local folk-groups from the villages, or join them in the singing and dancing, you are sure to have lots of fun. In the town of VILLANUEVA DEL ROSARIO... , during first week of October the localls honour their Patron Saint and much dancing, drinking and genneraal merrymaking goes on most of the night.
Taste the local WINES... every village makes their own, but beware, it is not for the faint-hearted! JEREZ DEL LA FRONTERA is famous for sherry and brandy and many of the bodegas are open to the public for wine tasting. MONTILLA in Cordoba province is well-known for its excellent wine and also RONDA produces some superb quality wines.
XCITING describes ANDALUCIA... especially at NAVIDAD (CHRISTMAS), one of the loveliest times to be in SPAIN. Celebrate this wwonderous season which lasts all of December until the THREE KINGS on January 6th.
YES, do come and visit us at IMAGES OF ANDALUCIA and  the also the village of YUNQUERA... with Arabic pasts retained in its steep, narrow streets.
ZZZ... IN THE SUN... and enjoy your new life in this beautiful region of Spain.