Lovers of western movies will no doubt recognize Cortijo del Fraile, an isolated, abandoned farmhouse on a windswept plain.  The hamlet is an enclosure of buildings surrounded by a low white wall, typical of Andalucian estates, with a central patio, chapel with bell tower and funerary crypt, kilns, outside ovens, stables and a well-preserved well. 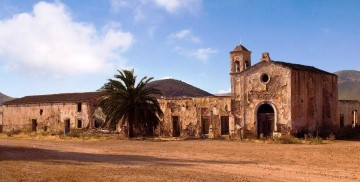 Built by Dominican friars in the eighteenth century it passed into private hands in 1836 as part of the process of secularization, which expropriated properties to religious orders. Since then the farm was used for field work, separating the homes of the owners and those of the employees. The owners left the farm in search of more profitable land, leaving the farm in the hands of an employee with a sharecropping interest.

Cortijo del Fraile is a traditional Spanish farmhouse with a dark past. Situated in the Natural Park of Cabo de Gata-Nijar, the once grand estate is now a dilapidated collection of buildings and would probably not draw a second glance had it not been for a real-life story of betrayal and bloody revenge that occurred there in 1928.

That’s how almost a century later it went on to become one of the most famous landmarks in Andalusia albeit for very grim reasons. On the night of 23rd July 1928 Cortijo Fraile has a chilling tale to tell.

Francisca Cañadas Morales was born in Nijar in 1908 and lived in Cortijo del Fraile. She was known as Paquita La Coja (Paquita the Lame) because of her gammy leg. Some attribute this to polio, others to a hip dislocation when her father smacked her bottom too hard as a baby to stop her crying.

Her father had arranged for her to marry Casimiro Perez Pino, a labourer who lived near the cortijo. Francisca had other ideas.  She was in love with her cousin, Francisco Montes Cañadas.

The wedding party met at the Cortijo Del Fraile in the evening for the nighttime wedding (traditional in those days) and guests noticed the bride was missing. Then they realised that her cousin Francisco was also missing and they worked out that she had eloped with the man she had been close to from a young age. The guests began searching for the couple and found Paquita a mile away, with her clothes torn and a bloody neck, claiming to have been strangled by masked robbers.

Francisco's body was found 8km away at Cañada Honda Serrata (later marked by an impromptu cairn of small stones and a wooden cross) on the track to Los Pipaces, shot three times. José Pérez, the brother of the abandoned groom, handed himself in. He claimed at the trial that he had not pulled the trigger, but would not say who did. Perez was found guilty and given a seven year prison term, but only served three, and died shortly after of typhus. Francisca's attempted murderers were Carmen Glen, her own sister and wife of José Perez. The killers were hooded and Francisca claimed to recognize the voices but refused to reveal the identities. Carmen was found guilty of attempted murder and served a 15-month jail sentence. 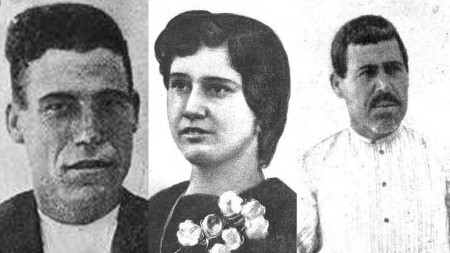 The groom Casimiro was found to be innocent of any connection with the murder. He never spoke to Francisca again and later married Josefa Segura. They lived in the fishing village of San José with their two children and he died in 1990. Francisca lived quietly as a recluse at El Hualix near the Cortijo, cared for by a niece. She never married, and refused to tell her story, despite petitions from journalist all over the world. She only met Carmen once again - when Francesca was very ill, Carmen came to the bedside and apologized. Francisca forgave her, but did not want to talk. For the rest of her life Francisca lived as a sad and lonely recluse - she died in 1987 and was buried in Nijar cemetery, not far from her murdered cousin.

Newspapers in Almeria province quickly picked up on the news and followed the case meticulously. They recounted every single morbid details of this tragic love story. Spain was under a dictatorship and so there was great control over political issues in the news.  The scandal was so big at the time that Nijar’s locals still refuse to talk about it to this day.

The facts were known as the Crime of Níjar.  Federico García Lorca was fascinated with the murder and kept newspaper clippings as all the gory facts unfolded. Inspired by this event created his work " Bodas de Sangre " “Blood Wedding.”

Cortijo del Fraile and its surroundings have been used as a natural film set in many films, the best known being “The Good, the Bad and the Ugly” and it is easy to imagine Clint Eastwood here.

The farmhouse is reached by the ALP-824 road that goes from Rodalquilar to the town of . Halfway between the two villages, about 2 kilometers from Rodalquilar, turn right  signposted Cortijo del Fraile.  This long straight track takes you direct to the cortijo.  Located between Los Albaricoques and Rodalquilar, in the very centre of the Nature Reserve of Cabo de Gata-Níja 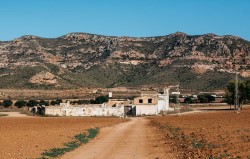 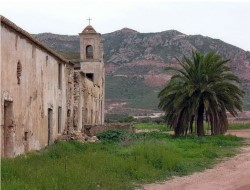 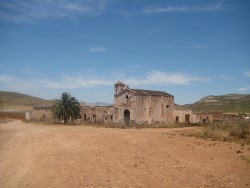