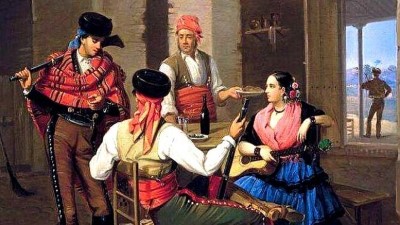 ANDALUCIA has been home to bandits since Roman times. The rugged, inhospitable terrain, hidden valleys and numerous caves of the areas inland from the coast offered refuge to fugitives. The tiny town of BENAOJAN was famously where many holed up. The CUEVA DEL GATO, located very near Benaoján, was one of the best known hideouts of bandits and smugglers in the Sierra Morena Mountains during the 19th century.

And the aristocrats and royalty who braved the journey were often held up by the bandits before they reached Ronda. Also becoming folk heroes, many bandoleros were said to defend the peasants against unfair taxes and government harassment. Most bandoleros were driven into banditry by poverty and the harsh feudal system still very active in Spain. For hundreds of years bandits had preyed on the merchants and noblemen who dared take to the region’s rough roads, especially during the 18th and 19th centuries. They captured popular imagination, instilling admiration as well as dread.

Most bandits died young very few achieved to reach old age and some escaped to South America. There were many bandits who left their name in the memory, not all of them were friendly.

“EL PERNALES " - Francisco Ríos González was born in 1879 in Estepa, Seville and was undoubtedly one of the most bloodthirsty bandits in history. He was cruel to his family and used banditry as an excuse to unleash his violence and blood lust. He had outstanding collaborators as bloodthirsty bandits as "El Niño de la Gloria" or "El Niño del Arahal", and also stood out for his many love affairs with gypsies and Christians like Maria "La Negra", Maria de las Nieves Caballero; his wife; o Embodies the "El Rubio", his last recognized love affair. In August 1907 on his way to Valencia to embark for America El Pernales was shot by the Guardia Civil along with “El Nino del Arahal”. The bodies were moved first to Villaverde and then to Alcaraz (Albacete) where the bodies of the bandits were exposed to the public in the courtyard of the former convent of Santo Domingo in that town, where they remain buried.

There are many legends and stories about DIEGO CORRIENTES – THE GENEROUS BANDIT because of his good acts. His short life appears full of romances, legends, fictional stories and kindly banditry. He was hated by the manic Don Francisco de Bruna, Regent of Seville city, because Diego teased him at every chance. De Bruna persecuted him fiercely, and as a result of a tip-off. Corrientes was caught in Cobillan, Badajoz. He was allowed to escape the Portuguese guards who held him and was discovered by a woman in a farmhouse in Portugal where the Regent sent a hundred men for him, making him a prisoner. He was tried, dragged, hanged and quartered in Seville on March 30, 1781, his remains exposed on the roads and his head enclosed in a cage until he was finally buried in the Church of San Roque of that city. 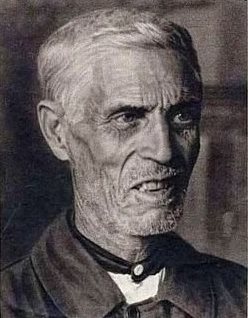 The last of the bandolero breed was JOSE MINGOLLA GALLARDO known as PASOS LARGOS. Born in 1873 in El Burgo, very close to Ronda, he was a murderous, agile and clever poacher who haunted the area between El Burgo and Yunquera. He gained renown for his blood-thirsty ways and not only killed a land owner, but also his own father. After leaving prison for murdering in revenge he tried to have a normal life but he was unable to adapt and decided to go back to his known activity. He was killed in 1934 in a cave shoot out with the Guardia Civil and has gone down in history as the last Andalusian bandit.

Then there was JOSE ULLOA TRAGABUCHES, a gypsy and famous bullfighter born in Arcos de la Frontera who became an outlaw when he found his wife was having an affair and killed her lover and then his wife by throwing her out of the window. From that moment José Ulloa Tragabuches vanishes. It is said he never recovered from his wife’s deception and out of desperation threw himself into the gorge at Ronda. Others insist on having seen him in Algeciras where they say he became a successful smuggler. Another story tells of his flight from town and joining up with the much feared LOS SIETE NINOS DE ECIJA, a gang of robbers and ruthless highwaymen who roamed the area around Ronda. It was years before six members of the gang were captured. They were tried and all died on the gallows, all except one, who remains untraceable, the seventh member: José Ulloa Navarro Tragabuches…

JUAN CABALLERO was born in Estepa in 1804. One year after marrying a local girl he became head of a gang of robbers. Soon he became known as "EL LERO ", and he became famous throughout Sierra Morena sharing prominence with "EL TEMPRANILLO"; whom he affectionately called compadre; dividing between them the fields of operations within the roads of Andalusia. He did not use violence during robberies and after the death of his friend “EL TEMPRANILLO” he decided to receive the proposed amnesty from the king and live in peace with his wife. He was one of the few bandits who were able to reach old age and died at the age of 91 years. 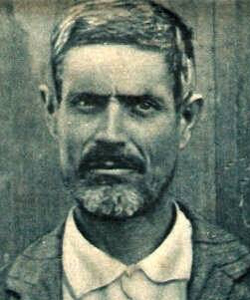