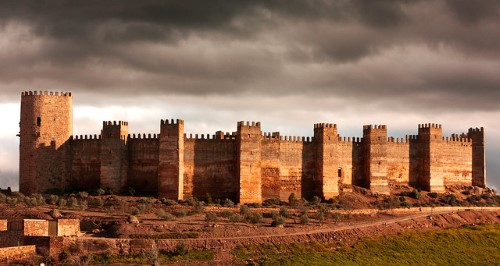 Spain has more than 2,500 castles from a variety of periods including Medieval, Moorish ad military fortresses and Andalusia has its fair share. These are just a few of the lesser-known ones.

Castillo de Tabernas is a ruined Moorish-style castle situated on top of a hill built in the 11th century during the time of Arab domination.  When it was built, it occupied the entire hill, though currently only a part is preserved. During the siege of Almeria, Ferdinand and Isabella ensconced themselves in the castle.

The Castillo de Santa Ana, Roquetas de Mar, is a fortification built between the 16th and 17th centuries used as a refuge to the inhabitants who lived near the port. The 1804 earthquake destroyed most of the structure and only one of the towers survived and the raised level area which has been conserved and recovered.

Situated on the little island, the defensive Sancti Petri fortification was once one of a series of forts that protected the inlet, Caño de Sancti Petri. The castle dates from the 13th century and is irregular shape and in the Moorish style. During the 1st century, the Phoenicians settled on the island, founding a temple dedicated to Melqart, their god. When the Romans arrived they dedicated the temple to Hercules.

Castillo de San Sebastian is located on a tiny island on one of the furthest ends of La Caleta, where legend has it the Kronos Temple was located. This fortification takes its name from an old hermitage built in the 15th century by sailors from a Venetian ship. Inside and on the base of a Muslim lookout is the current lighthouse that is 135 feet above sea level. Also, thanks to its original floor, this castle has been the backdrop for several films.

Zuheros Castle occupies a privileged position nestled in rock. Founded by the Arabs in the ninth century, the current appearance was probably built in the 11th or 12th century when the area was ruled by the Zirid dynasty. It now houses the remains of a Renaissance-style palace.

Castillo Almodovar del Río is of Arabic origin, though restored and reconstructed on several occasions, is Gothic-Mudejar in style. This fortification is one of the most beautiful and spectacular in the entire Andalusian region. It has a fairytale structure, so you can enjoy its beautiful towers: the keep, the round one and the square one; take a pleasant stroll through its courtyards and enjoy the impressive views of the Córdoba countryside from its parapets. 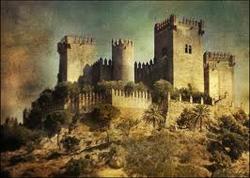 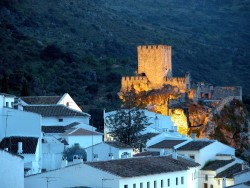 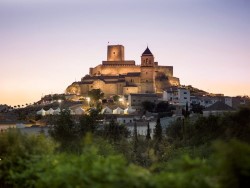 The Alcazaba de Guadix, lies in the center of the town of the same name. The first fortification at this site was probably built in Roman times. The present Guadix Alcazaba was built during the 10th and 11th century by the Moors, on the ruins of a former Moorish fortress built in the early stages of the Arab invasion in the 8th century. After the conquest of the Catholic Monarchs in 1489, the abandonment of the fort began. In the sixteenth century the building was partially destroyed and lost much of the interior rooms.

The construction of Lachar Castle is attributed to the end of the Nazari period, a unique fortress that became a palace. The current building however is the result of a romantic arabesque-design according to the fashion of the late nineteenth and early twentieth century. During the first decade of this century it was privately owned by a Dutch citizen who held the post of honorary consul of Guinea-Bissau, where for years waved the flag of the African country on the facade of the castle, along with that of Spain. The current owners are making certain renovations and trying to recover the artistic and historical elements of the castle that were affected during the modernization by the previous owners. After the repairs and redecorations the owners are going to give limited access on certain public days.

Gérgal Castle was built somewhere during the late Middle Ages and by 1492 it had fallen into the hands of the Catholic Monarchs who donated the castle to Alonso de Cárdenas, Grand Master of the Order of Santiago, for outstanding services during the Granada War. Over the centuries the castle changed hands and was re-built a number of times in the area until in the middle of the 18th century when it belonged to Isabel Pacheco Portocarrero, Countesss of Puebla del Maestre and Marchioness of Torre de las Sirgadas. The castle we see today dates back to the rebuilding in the 17th century. Its core is a square crenellated tower with lower round towers at its corners. At its north western facade and attached to one of the corner towers is a semicircular bastion. It is build up out of horizontally laid slabs of slate.

Aracena Castle was built on the site of an ancient Moorish castle in the 13th century. The walled enclosure was partitioned inside, with the tower of homage, or castle keep, defending the barrier that divided its interior. The fortress consists of the alcazaba, or citadel, with its watch tower, cistern and walls; these are flanked by other towers, as well as a fence line that, in its interior, once accommodated medieval living quarters.

Castillo de los Guzmanes was started in 1402; when the old Moorish Alcazar was pulled down to build the present- day one. The result was a magnificent luxurious royal palace with ten towers including the Muslim Tower of Homage built by the Arabs.  After restoration over the last few years, the Alcázar is now in good condition.

The province of JAEN has the greatest concentration of fortresses and castles of any region in Europe! Due to its strategic location as the frontier between Christian Castilla and Muslim Granada in the Middle Ages, almost 90 castles in this province alone have survived to the present day.

The Castle of Segura de la Sierra is 1 km above sea level, with the rest of the village sprawling down the hill. Deep within the Segura mountain range, Segura de la Sierra was one of the first Andalusian settlements to be lost by the Muslims during the Castilian invasions in the 1200s. The original construction was destroyed during the conquest and rebuilt as the castle we see today. From the battlements and towers, you can spot El Yelmo, the highest mountain in the region.

La Iruela is a small hamlet near to Cazorola in the province’s eastern mountains home to a small castle that perches dramatically on a peña or rocky crag. The Knights Templar built what you can see today on top of a Moorish core, and from the top of the keep tower, you can really appreciate the beauty of the rolling, olive-grove-studded hills.

One of the oldest and most well preserved castles in all of Europe, the Burgalimar Castle in Banos de la Encina guards the northern marches of Jaen province. Built in 968 by orders of Caliph al-Hakam, its fifteen towers rise up from a concrete-like construction that forms its mighty wall. The castle has hardly suffered any damage and represents a perfect example of a fortified complex from the Caliphate of Cordoba, at the same time that it is one of the best preserved Muslim castles in all of Spain. 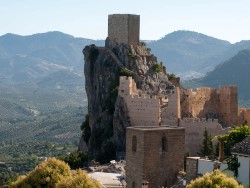 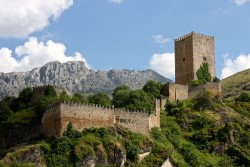 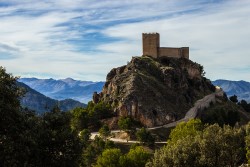 Bentomiz Castle is an ancient Moorish fortress built on a hill near the village of Arenas to the northeast of Velez-Malaga. The castle site is thought to have been occupied by the Phoenicians, Greeks and Romans, although it is not clear which parts date to which period. Roman baths have been found there. The castle is now ruined, but there are still towers, walls and underground chambers. its privilreged location gives way to a view over most of the towns in the region, as well as the Mediterranean coast

The Alcazaba de Antequera looks out over this beautiful city and is surrounded by the best views in the district. Its keep has an angular floor and is considered one of the widest Andalucian Muslim keeps. It is crowned with a hood built in 1582 to place the bell and clock of the locality. In this setting you can also enjoy the mosaics and Roman ruins, as well as one of Antequera’s most characteristic neighbourhoods, El Portichuelo. Regular gastronomic events are also organised by moonlight to bring back the flavours of olden days; a unique opportunity not to be missed.

The Castle of Las Aguzaderas is located just outside the town of El Coronil. This curious castle, which appears to have been built by the Moors, was probably erected to defend a spring which was the water source for the fountain of Las Aguzaderas. This area was an intense war zone between the Moors and the Christians during hundreds of years and that made water a precious resource.

Alcalá de Guadaíra Castle is the result of almost 4,500 years of human history with archaeological from the Bronze Age when a small walled village settled down on the east edge of the Hill. The current castle was built during the times of Muslim domination, in the 11th and 12th centuries. Today the castle is restored after been abandoned a long time since the 19th centurY.